“There was more surrealism rampant in Hollywood than all the surrealists could invent in a lifetime.” – Man Ray

In 1940, Man Ray fled war-torn France and arrived in Hollywood. The acclaimed surrealist, who was born in the United States but relocated to Paris in 1921, spent the next eleven years in California making art and recreating many of his own paintings and photographs assumed lost during the Nazi Occupation. While living in Hollywood Man Ray married a beautiful dancer named Juliet Browner and hobnobbed with stars and studio executives at popular hotspots such as the Brown Derby in the hopes of breaking into the movie business. He also found an unexpected kinship with another creative eccentric, the writer, director, and producer Albert Lewin.

Like Man Ray, Lewin was born on the East Coast and raised by Jewish working-class parents. As a disciplined student and quick learner, Lewin was able to earn scholarships that allowed him to attend New York University and Harvard where he recieved a Masters in English Literature. After being employed briefly as a film and drama critic for The Jewish Tribune in New York, Lewin traveled west and found work as a script reader at MGM. While there, he developed a close working relationship with Hollywood wunderkind Irving Thalberg who encouraged him to pursue a career in film production and throughout the 1930s Lewin helped develop a number of high-profile projects at MGM and Paramount. But the studios couldn’t contain Lewin’s boundless creativity and he eventually began writing directing and producing his own films including THE MOON IN SIXPENCE (’42), THE PICTURE OF DORIAN GRAY (’45) and THE PRIVATE AFFAIRS OF BEL AMI (’47).

When Man Ray first encountered Lewin he was a successful producer and director who owned a spectacular beachside home in the Pacific Palisades designed by famed architect Richard Neutra. During extravagant dinner parties attended by celebrity guests such as Erich von Stroheim, Jean Renoir and Max Ernst, the two aesthetes bonded over their mutual appreciation of modern art and literature, shared radical politics and frustration with Hollywood, where profit frequently took precedence over artistic ambitions.

During this period Lewin regularly tried to find Man Ray work but more often than not he was met with indifference. The independent and headstrong artist wasn’t interested in collaboration and longed for the day when “the production of a film would be in the hands of one mastermind” (The Bad and the Beautiful: Hollywood in the Fifties). To make ends meet, Man Ray taught art classes, gave lectures, photographed starlets for magazines and organized a handful of small art exhibits.

Lewin finally convinced his artist friend to collaborate with him during the making of PANDORA AND THE FLYING DUTCHMAN (’51). Lewin wrote, directed and co-produced this unabashedly sexy and surreal romantic fantasy starring Ava Gardner as an American nightclub singer named Pandora Reynolds. Like her mythical namesake, Pandora unleashes pandemonium on a small Spanish fishing village where her provocative beauty inspires men to sacrifice themselves and their dreams in order to win her affection. Despite an ample supply of devoted suitors, Pandora remains cold and aloof until a mysterious Dutchman named Hendrick van der Zee (James Mason) sails into her life and captures her fickle heart.

During production Man Ray was tasked with taking portrait photographs of Ava Gardner to be used in the film as well as creating unique paintings that unfortunately never appear on the screen (the painting we do see was inspired by Man Ray’s original but was reportedly created by set artist Ferdinand Bellan). Man Ray also designed a magnificent modern-style chess set used by actor Harold Warrender in one scene. The film’s distinct mise-en-scène additionally evokes surrealist elements such as cavernous windows and broken bits of Roman statuary including the large heads and limbs of nameless marble deities that can often be found in Man Ray’s own work.

Man Ray’s contribution also extends to Lewin’s script, which employees dream-logic and symbolism to communicate its romantic tragedy involving doomed lovers trapped in a kind of supernatural time loop. Viewers are routinely propelled back in time and transported to the present in a way that distorts the narrative. The film’s fragmentary structure suggests the influence of photomontage, a type of surrealist collage art. Standout sequences, including an ultramodern racecar set ablaze and a wild beach party with giggling guests, challenge logic and defy easy description. These moments could have easily been borrowed from other films, rearranged and re-edited to suit Lewin’s vision.

Combining the Greek myth of Pandora with the Dutch legend of the Flying Dutchman, this adult fable defies easy classification. It’s a talky film but the lyrical language, punctuated by breathless pauses and darting looks shared between the attractive cast, creates an enchanting verbal rhythm. It’s also an absolutely gorgeous production with bold artistic aims that greatly benefit from the color cinematography provided by Jack Cardiff.

Ava Gardner is a stunning woman but in Lewin’s film she’s absolutely luminous. Cardiff reportedly shot her by incorporating extensive top lighting and backlighting to give the actress an otherworldly quality. In turn, she overshadows everything and everyone around her and becomes a kind of cinematic sun that the rest of the cast revolves around. Lewin reportedly adored his star, although he originally wanted to cast Greta Garbo who had retired ten years earlier. With her vivacious personality and remarkable beauty, Gardner easily won Lewin over as well as the rest of the cast and crew including Man Ray who was enchanted by the dark-haired femme fatale.

“She (Ava Gardner) was absolutely ravishing. No film, I thought, had ever done her justice. And as a model, no one with my experience with mannequins and professionals surpassed her.” – Man Ray 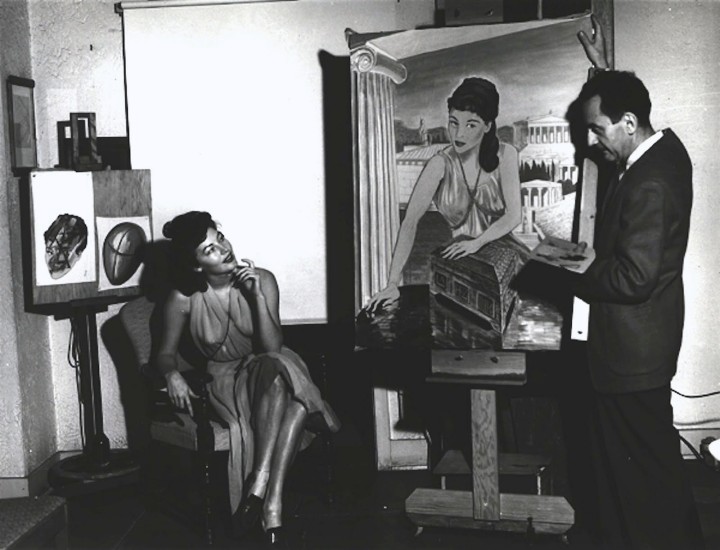 When PANDORA AND THE FLYING DUTCHMAN was released it received mixed reviews from American critics who didn’t know what to make of the highly stylized film but European critics had no such qualms and embraced Lewin’s bold artistic vision. They were particularly taken with the film’s lovely female star. Critic and future filmmaker François Truffaut wrote in Cahiers du Cinéma, “Ava Gardner’s body is yet that of the first woman, who, along with her hair, undoes the ties of all fatalities … cinema, once again the magic lantern of our childhood, has borne us very far and very high on the wings of a dream.” And Greek critic and filmmaker Ado Kyrou (aka Adonis A. Kyrou) may have said it best when he remarked that, “Pandora is the only resolutely surrealist woman in the whole of movie history. Ava Gardner was never more beautiful …”

by Kimberly Lindbergs, originally written in 2018 and published on FilmStruck.com