In the tradition of classic French heist films such as Touchez pas au grisbi (1954), Rififi (1955) and Bob le flambeur (1956), Farewell, Friend (aka Honor Among Thieves, 1968) takes viewers on a treacherous adventure where femme fatales lurk around every shadowy corner and crime rarely pays. But that doesn’t stop some fortune hunters from risking everything to make a quick buck or in this case, repay a debt to a dead man.

In Farewell, Friend Alain Delon and Charles Bronson play two restless combat veterans who have just survived the Algerian War. We first meet Dino Barran (Delon) and Franz Propp (Bronson) after they arrive at the Toulon Naval Base in Marseille, France. Bronson, a self-assured legionnaire, swaggers off a battleship while Delon, a military doctor, confidently strolls up beside him. They are both effortlessly cool, calm and collected. Two genuine tough guys who experienced combat firsthand offscreen. Delon was in the French Navy during the First Indochina War and Bronson was in the United States Army Air Forces during WWII. Both men know what it’s like to fight for their lives and return home to face an uncertain future. In turn, they effortlessly inhabit their world-weary screen characters. Bronson may be a bit older and more grizzled but Delon’s striking good looks are matched by his steely-eyed resolve.

Soon after touching solid ground, Barran is approached by a lovely woman (Olga Georges-Picot) who was the girlfriend of a fellow soldier who died in Algeria. She asks for his help in a complicated scheme involving the secret return of some stolen bonds to a safe located in a large corporation. In order to do so, he will have to take a job as a corporate physician and dole out medical advice to employees and executives. In the meantime, Propp is busying himself as a pimp to kinky, cloistered and well-heeled individuals in order to rob them. Easily bored and unsatisfied with civilian life, Propp begins stalking Barran after suspecting that he might be planning some criminal activity. His instincts are right and when Barran begins making plans to break into the safe, Franz decides to get in on the action. Unfortunately for them both the crime becomes more complicated than either man was prepared for and the rewards become more obscured with every throw of the dice. 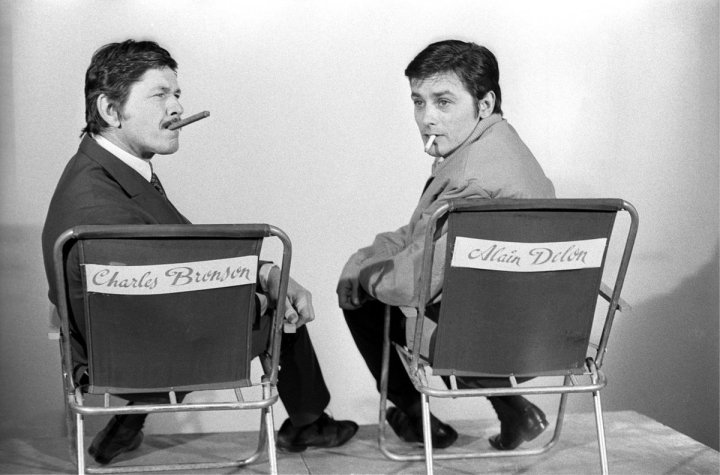 The film was directed and written by Jean Herman (aka Jean Vautrin), a French screenwriter and prolific novelist who made a handful of films in the 1960s and early 1970s including Popsy Pop (1960) and Jeff (1969), which also starred Alain Delon. Herman is best known for designing unusual thrillers that deconstructed classic noir tropes. The femme fatales and villains in his stories were complicated characters, painted in shades of gray instead of stark black and white. He also had a sense of humor and his stories contained roundabout plots and surprising twists but they rarely took themselves too seriously.

Farewell, Friend is a great example of Herman’s talents. It is a slick, sexy and cynical film with a wry sense of humor. The script is a jumble of absurd twists and bizarre turns that will frustrate and confuse some but it rewards attentive viewers. Made a year after Delon appeared in Jean-Pierre Melville’s critically acclaimed masterpiece Le Samouraï (1967), Farewell, Friend slyly references Delon’s iconic role by having him drive around in another vintage Citroën DS but the film’s real ace in the hole is the onscreen chemistry shared between its two stars. Delon and Bronson are terrific together as combat veterans eager to begin their next big adventure. They genuinely seem to be enjoying themselves and smartly play off each other’s strengths. Delon is a chilly, no-nonsense professional who rarely smiles while Bronson’s chiseled mug constantly sports a lopsided grin and he cracks jokes at every opportunity. Despite their obvious differences, both men are wound as tight as a new watch. You expect them to explode in a fury of fists at any moment and they eventually do. These dueling personalities make an entertaining match and they manage to keep things interesting even when the plot occasionally gets derailed.

Delon recommended Bronson for the role of Franz Propp after seeing him in Machine-Gun Kelly (1958), a low-budget Roger Corman picture that recounted the crimes of the notorious Prohibition era gangster. At first, Bronson was reluctant to appear in a European film fearing it might harm his career but when producers offered him $100,000 (double his Hollywood salary at the time) he couldn’t refuse and it proved to be a wise decision. Farewell, Friend failed to find an appreciative audience in the U.S. but it was a huge hit in Europe and Japan. It also prompted Sergio Leone to cast him in Once Upon A Time in the West (1968), which changed the trajectory of his career. Thanks to Delon’s encouragement and support, Bronson was no longer just an interesting character actor in Hollywood, he had become a bankable international movie star.

During filming, Delon also struck up a friendship with Bronson that lasted a lifetime. Along with their military backgrounds, working-class upbringings and a shared passion for art, the two men were both highly guarded individuals who played their cards close to the vest so it’s not surprising that their screen camaraderie was genuine. In a 1968 interview Bronson said, “I think he (Delon) is a very good actor. What he does, he does well and I respect him greatly as a man.”

Three years after the release of Farewell, Friend the two actors appeared together again in Terence Young’s atypical western Red Sun (1971) opposite Toshirô Mifune (the curious can find an earlier piece I wrote about Red Sun here). Once again, the film failed to find an American audience but it was a box office success in Europe and Japan, where Delon and Bronson remain incredibly popular with film fans and maintain the kind of iconic status that Americans associate with screen figures like Bogart, James Dean and John Wayne.

Farewell, Friend may not be as revered as Touchez pas au grisbi (1954), Rififi (1955) and Bob le flambeur but it is a hell of a lot of fun and makes a great double feature with the previously mentioned Red Sun if you want to see more of Delon and Bronson in action.