When I’m feeling low I tend to gravitate towards what I like to call “comfort viewing” and my comfort viewing is classic horror films. During the cold winter months, cozying up on the couch with a warm beverage and a couple of creaky old black and white horror movies can make even the worse week seem manageable. Fortunately, I found exactly what I required streaming online, The Haunted Strangler (1958) and Corridors of Blood (1958). Both of these low-budget British thrillers were directed by Robert Day and feature standout performances from William Henry Pratt, better known as Boris Karloff.

The films Karloff made at the end of his long career tend to be dismissed by film fans or treated as lesser work in his distinguished canon. While it would be difficult for any actor to reach the glorious cinematic heights he scaled early in his career while collaborating with Universal, Columbia, Warner Bros., MGM, and RKO during the 1930s and 1940s, astute horror fans will find much to admire in Karloff’s late-period films if they are willing to venture off the beaten path. In the past, I have written pieces about his roles in The Terror (1963) and Curse of the Crimson Altar (1967), which are well worth a look, but in these films, Karloff’s performances are hampered by his failing health. That is not the case with The Haunted Strangler and Corridors of Blood, which demonstrate that the actor rightfully nicknamed “The Uncanny” was still firing on all cylinders at age 70.

The Haunted Strangler and Corridors of Blood were both made by Amalgamated Productions, a small international company run by British ex-pat Richard Gordon. Before becoming a producer, Gordon was a film journalist who first met Karloff while interviewing him for an article he was writing. The two became friendly, and Karloff eventually approached Gordon with an idea for a film based on a story by Jan Read titled “Stranglehold” that was written with the actor in mind. Gordon was enthusiastic about working with the horror icon and Karloff was eager to make a film in England so the two men hashed out a plan to finance their project, retitled it The Haunted Strangler, and Robert Day (The Green Man [1956], First Man into Space [1959], Two-Way Stretch [1960], Tarzan the Magnificent [1960]) was brought on board to direct. 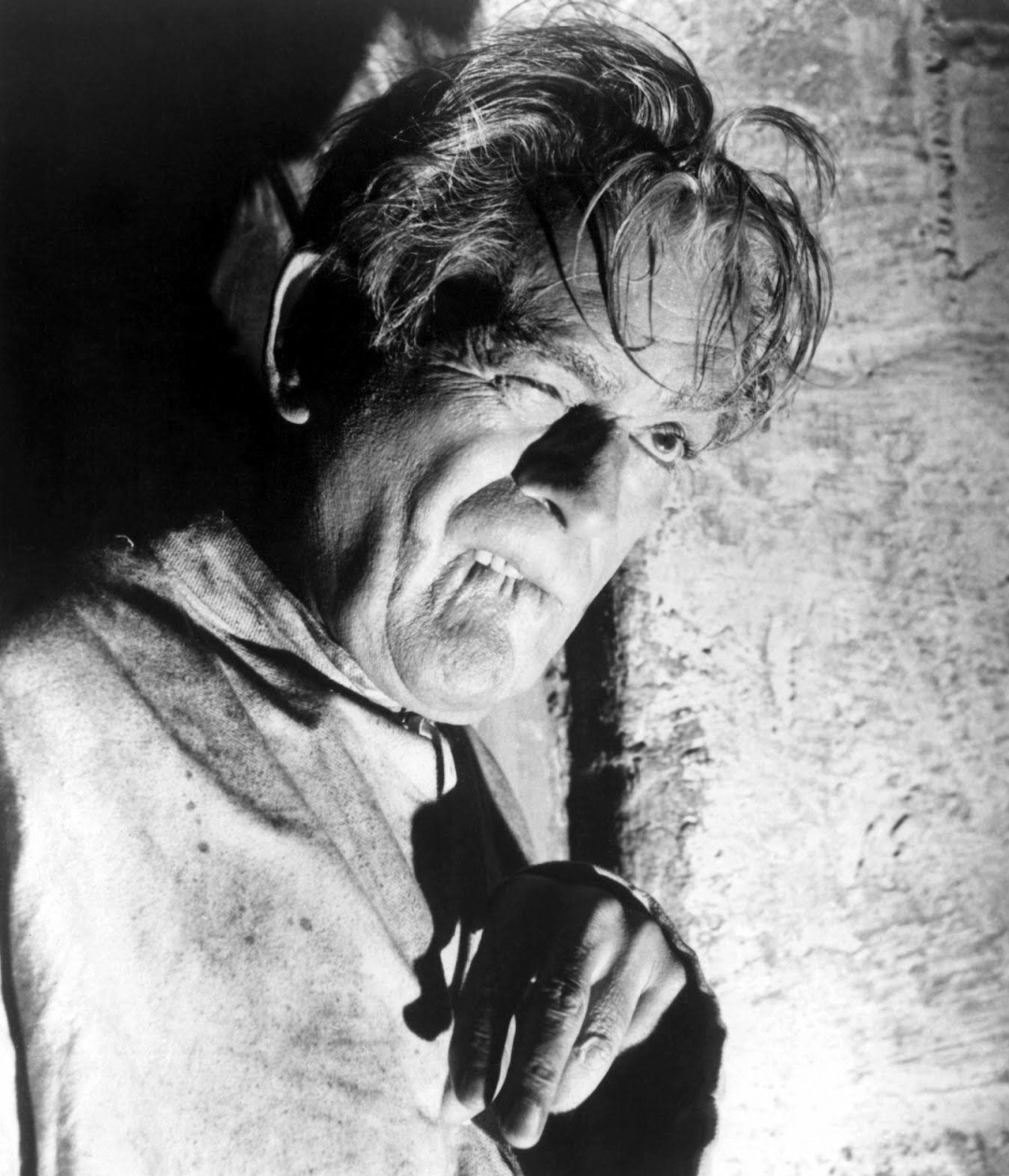 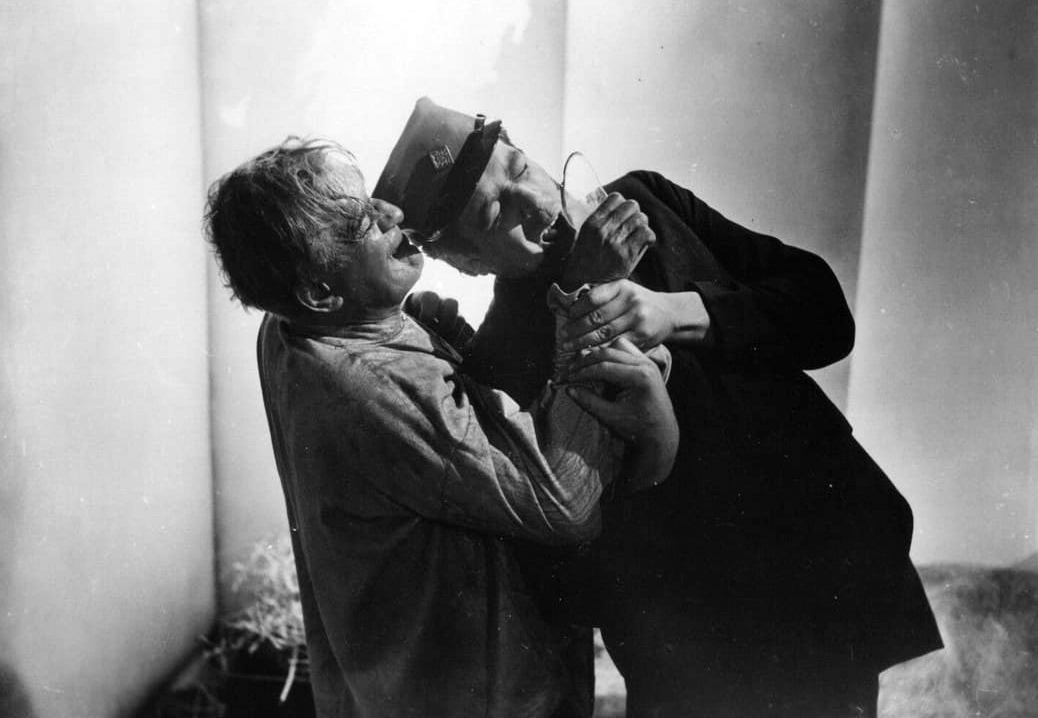 Shot in just three weeks with a minuscule budget and limited resources, The Haunted Strangler is a marvel of economical filmmaking and a showcase for Karloff’s acting talents. The plot is simple but effective and centers around a sensitive 19th-century writer (Boris Karloff) who becomes obsessed with a notorious murderer known as the Haymarket Strangler, and in the process, he begins exhibiting similar killer instincts himself.

The film sets were created at Walton Studios in Surrey and imaginatively evoke the gas-lit streets of Victorian London using moody black and white photography that accentuates the shadows and fog. Instead of employing a lot of makeup and effects, Karloff chose to distort his face giving himself an inborn monstrous appearance that ignites genuine terror and is supported by the impressive scope of his performance. His transformation from a soft-spoken wordsmith and empathetic truth seeker into a grotesque butchering brute is striking and recalls aspects of his challenging roles in Frankenstein (1931), The Ghoul (1933), The Black Room (1935), and The Walking Dead (1936).

Karloff’s contract with Richard Gordon required that he appear in two Amalgamated Productions, and his second and last film with the studio was Corridors of Blood. Although it is not as effective as The Haunted Strangler, Corridors of Blood has its own allure, and director Robert Day maintains a similar Victorian ambiance. The storyline follows the misadventures of Dr. Thomas Bolton (Boris Karloff), an ambitious surgeon working in London during the 1840s who is eager to discover a more humane way to care for his patients. His desire to perform pain-free operations leads him to experiment with anesthetic gases, and in the process, he becomes enmeshed with a gang of murderous cons.

Christopher Lee plays one of the conmen, and his character bears a striking resemblance to the vicious homicidal “resurrection-man” Karloff played in The Body Snatcher (1945). Both characters kill for money and sell cadavers to medical professionals while creeping around fog-shrouded streets wearing stovepipe hats that make their tall lanky frames look particularly menacing. And much like The Body Snatcher, Corridors of Blood also borrows story elements from the infamous true-life crimes of Burke and Hare that took place in Scotland in 1828.

Karloff’s role is much more subdued in Corridors of Blood, and the film often resembles a historic drama more than the Grand Guignol-style spectacle the material might suggest. Despite its slow tempo and lack of scares, it is an admirable follow-up to The Haunted Strangler, and Karloff is in top form as the sympathetic Doctor Bolton.

As the tortured man-made monster in Frankenstein no one knew more about the troubling depiction of science-minded men in horror cinema than Boris Karloff. The actor’s accomplished depiction of a gentle doctor desperate to relieve his patients of their pain in Corridors of Blood suggests Karloff was knowingly bucking convention. In countless horror films, medical men are portrayed as deranged egomaniacs hell-bent on advancing their professional standing and satisfying personal desires with little or no regard for human suffering. But Karloff’s compassionate Doctor Bolton is a welcome and imaginative reinterpretation of a tired stereotype. It’s also a wonderful example of the actor’s incredible range and emotional depth, which has often been overlooked or taken for granted.