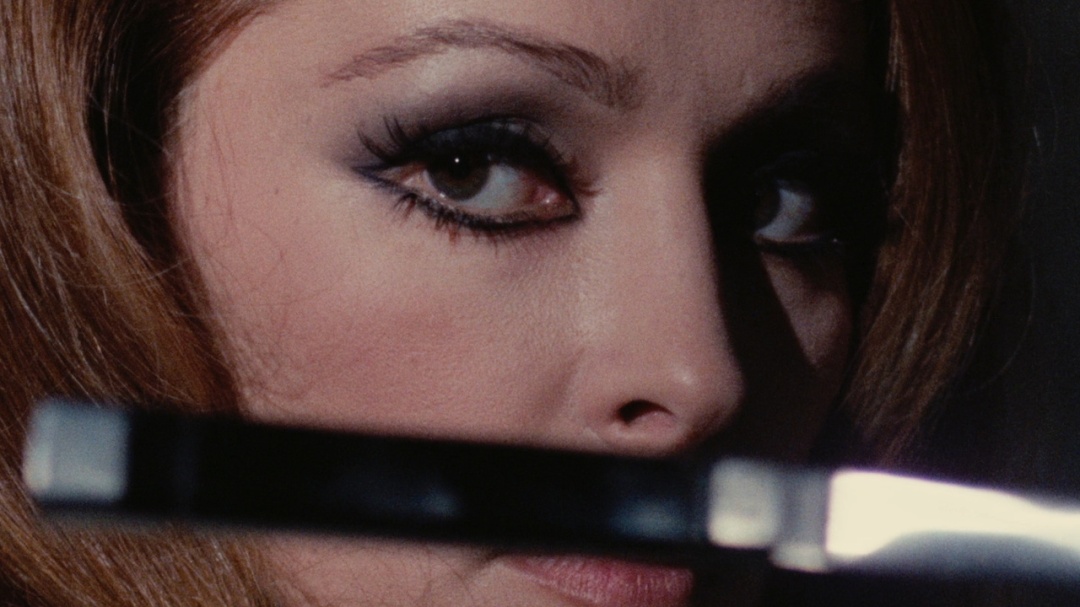 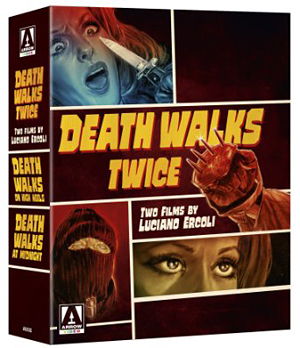 The fine folks at Arrow deserve applause for their diligent efforts to release a number of exceptional giallo films on Blu-ray in recent years. Some of the films you can currently purchase from them include the suggestively titled Your Vice is a Locked Room and Only I Have the Key (1972) and What Have You Done to Solange? (1972) as well as cornerstones of the genre such as Mario Bava’s Blood and Black Lace (1964), The Girl Who Knew Too Much (1969) and Five Dolls for an August Moon (1970) along with Dario Argento’s The Bird with the Crystal Plumage (1970), The Bay of Blood (1971) and Deep Red (1975). Arrow discs typically boast beautiful packaging that rivals Criterion and they come loaded with extras including accompanying booklets, audio commentaries and video interviews with the film’s creators along with other industry professionals.

Their latest offering is a limited edition double disc Blu-ray box set titled Death Walks Twice that contains two outstanding examples of the genre, Death Walks on High Heels (1971) and Death Walks at Midnight (1972). Both films were directed by Luciano Ercoli and feature Ercoli’s wife, actress Susan Scott (Nieves Navarro). Like many of the best Italian thrillers, these two budget conscious productions look more luxurious than their American counterparts thanks to the creative direction, exotic European settings (Milan, Paris, London and Catalonia) and their innovative use of period specific aesthetics and attitudes including the music, architecture, fashions, and shifting sexual mores of the times. Comprised of labyrinth-like plots inspired by classic Alfred Hitchcock movies and the best Film Noir, Arrow’s new Death Walks Twice box set should appeal to genre novices as well as seasoned giallo fans.

Death Walks on High Heels begins with the murder of a jewel thief. We soon learn that the burglar was the father of an exotic dancer named Nicole (Susan Scott) when police question her about some missing jewels. After Nicole is assaulted by a masked assailant eager to get his hands on her father’s missing loot, she flees the nightclubs of Paris and retreats to a small fishing village outside of London with her new lover (Frank Wolff). Unfortunately for Nicole, her mysterious attacker has plans of his own.

The more interesting film in this double feature is Death Walks at Midnight and it opens in Milan where a beautiful fashion model named Valentina (Susan Scott) has agreed to take some psychedelic drugs for an unusual photo shoot at her swanky apartment. In her delirious state, Valentina peers out the window and thinks she witnesses a brutal murder taking place in a building across the street. When the police refuse to believe her account of the events, Valentina takes matters into her own hands and pursues the phantom killer on her own.

The movies feature similar casts including the goofy but extremely likable Simón Andreu who hounds Susan Scott throughout both films. Other recurring faces include Belgium actress Claudie Lange along with Italian actor Carlo Gentili who repeatedly plays a Police Inspector. Also keep an eye-out for Luciano Rossi, an interesting risk-taking screen performer who has been referred to as the “Italian Klaus Kinski.”

As I mentioned early on, Susan Scott’s husband Luciano Ercoli directed the films and he collaborated with a similar crew on both productions including the prolific scriptwriter Ernesto Gastaldi. Gastaldi wrote a slew of memorable giallo films as well as Erocoli’s first feature with Susan Scott titled Forbidden Photos of a Lady Above Suspicion (1970), which wasn’t included in this collection. Today the writer is probably best known to American audiences for his work on Sergio Leone’s Once Upon a Time in America (1984). Another important collaborator was musician Stelvio Cipriani who composed sensual jazz inspired scores that conjure up breezy drives along the Spanish coast and smoky European discotheques of the 1970s. Cipriani, much like writer Gastaldi, was also a prolific contributor to Italian genre cinema and the men jointly worked on a number of other films together such as Human Cobras (1971), The Great Alligator (1979) and The Concorde Affair (1979).

Set decorator Juan Alberto Soler and costume supervisor Osanna Guardini deserve a lot of credit for their work, which has a distinctly 70s look. The upscale secluded beach house in Death Walks on High Heels and Valentina’s chic apartment in Death Walk at Midnight ooze with atmosphere thanks to perfectly placed table lamps, eye-catching art and luxurious fur bedding that all hint at the hedonistic lifestyle of the characters.

It’s worth noting that Susan Scott has rarely looked as beautiful and glamorous as she does here. This is partially due to the way her husband shoots her, accentuating the actress’s long limbs, doe-like eyes and wavy red locks that catch the light with every turn of her lovely head. But Scott is more than just a pretty face. Her acting is exceptional in these films where she defies the “damsel in distress” stereotype often found in giallo and is in full command of her own sexuality. She’s a strong, tough talking dame who doesn’t suffer fools lightly and takes charge when her male counterparts are fumbling. She also displays a sincere vulnerability along with brains that make her a multifaceted and extremely affable heroine.

Classic film fans who appreciate darker and atypical Film Noir should find these Italian thrillers particularly enjoyable. And if you’re a fan of Hitchcock’s output you might appreciate the references to some of the director’s most critically acclaimed films including Rear Window (1954) and Vertigo (1958). Despite my high praise, these films do suffer from a few hiccups including some dubious plot twists and pacing issues that might frustrate disengaged viewers. There is also a challenging scene involving Susan Scott’s use of blackface (pictured above) during an exotic dance number in Death Walks on High Heels that will undoubtedly raise a few eyebrows. But if you can place the act within the context of its time (Europe has been behind the U.S. in wrestling with the racist implications of white performers using blackface) it becomes an interesting plot point as the film unfolds due to how it frames the character’s duel identity and the way she’s perceived and exploited throughout the course of the film that hints at a tenuous link to Michelangelo Antonioni’s 1962 Italian arthouse favorite, L’Eclisse.

I own the original DVDs of Death Walks on High Heels and Death Walks at Midnight that were released together by NoShame 10-years ago so I was able to make a comparison and was impressed with the sharper colors and superior audio clearly apparent on Arrow’s new Blu-ray discs. Both films look and sound much better and brighter thanks to a brand new restoration and high-definition transfer made from the film’s original negatives.

Besides these improvements, the new box set is packaged with a number of worthwhile extras including a lush illustrated booklet smartly compiled by writer’s Troy Howarth (So Deadly, So Perverse: 50 Years of Italian Giallo Films), Danny Shipka (Perverse Titillation: The Exploitation Cinema of Italy, Spain and France) and Leonard Jacobs. You’ll also find video interviews with director Luciano Ercoli and actress Susan Scott (a.k.a. Nieves Navarro) as well as composer Stelvio Cipriani. And there are extensive multipart interviews with screenwriter Ernesto Gastaldi along with a lovely video essay by Scottish writer and film scholar Michael Mackenzie that celebrates Susan Scott’s unique contributions to the giallo genre. Last but certainly not least, author and film critic Tim Lucas supplies audio commentaries for both discs that provide an in-depth look at the people behind and in front of the camera while offering up insightful observations that explore the creative motivations and inspiration that informed each film.

More information about Arrow’s Death Walks Twice Blu-ray set can be found on their website.