On Sunday many will be glued to their television sets watching the annual Oscar ceremony unfold. At this time of year I tend to contemplate all the new releases I’ve seen in the past 12 months and linger over the films that have captured my imagination, awed me, inspired me, or just made me think about old ideas and tired truths in new ways.

When asked what my general feelings are about the 2013 year in film I’m prone to answer with one word: brutal. After sitting through a barrage of noteworthy films and documentaries about war criminals, human rights abuses, animal cruelty, wretched poverty, unquenchable greed, gratuitous vanity, sexual brutality, mental anguish and religious hypocrisy in recent months I’ve often felt as if I’d been beaten up and left for dead. I’m still recovering from the bruises some of these films left on me but I’m grateful for their impact.

It seems inevitable that after more than a decade marred by war, political strife, economic disasters, and incredible abuses of power by individuals as well as political parties and corporate structures that the residue from these events would eventually consume our movie theaters and multiplexes. 2013 seemed to deliver a tsunami of angry, anxiety-riddled, bloody, exhausted, and desperate pleas for a wiser and more empathetic world than the one we’re currently living in. But many of the best films concealed their appeals behind jaw-dropping imagery and noteworthy scores creating a memorable kaleidoscope of sound and vision that is still ringing in my head.

As a member of the Alliance of Women Film Journalists, I’m asked to create a list of my Top 10 Favorite Films each year and participate in voting for the EDA Awards that the organization hands out to filmmakers but this year voting was rushed and our individual lists were never published. As I’ve often pointed out, my own taste in modern cinema tends to be somewhat eclectic and I rarely agree with the final outcome of the awards but this year I was extremely happy that one of my favorite films of the year, Steve McQueen’s remarkable 12 YEARS A SLAVE, received the EDA award for Best Film of 2013. So it should come as no surprise that this coming Sunday I’ll be rooting for it to take home the Best Picture award and for Steve McQueen to take home the Best Director award.

Since seeing McQueen’s first feature-length film HUNGER (2008), which focused on IRA member Bobby Sand and examined his participation in the 1981 Irish hunger strike, I’ve found him to be one of the most interesting, engaging and intelligent directors currently making movies. His artistic background seems to have given him an appreciation for visual composition, staging, framing, performance, and sound that I find lacking in many of his contemporaries. I’m not surprised that critics such as Matt-Zoller Seitz have favorably compared him to Stanley Kubrick while others such as Mark Harris have hurled the Kubrick mantle at McQueen as a sort of backhanded compliment or softball-style insult. Although I think the Kubrick comparisons are a little premature, McQueen does seem to possess a painter’s eye and a surgeon’s precision. He is also much more interested in making audiences “think” instead of making them “feel” and frankly that’s a quality that’s vastly underrated and frequently missing from modern popular cinema. 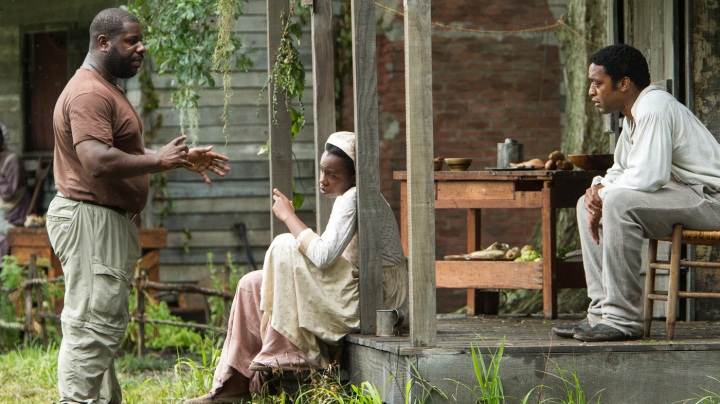 12 YEARS A SLAVE features the director’s most conventional narrative yet but it packs an emotional wallop and a persistent vision that has remained with me since I first viewed it. The film has received multiple awards this year (over 100 to be exact) so winning an Academy Award seems irrelevant at this point but it would be a historical first for a black director and that’s something worth celebrating. And although the film has received almost universal critical praise there has been some notable opposition from critics such as Jonathan Rosenbaum, Adam Nayman, Melissa Anderson, Stephanie Zacharek, Dana Stevens and Armond White who have expressed serious reservations about the film’s depiction of violence as well as its apparent ability to encourage something often referred to as “white liberal guilt.”

To be frank I find the term “white liberal guilt” pointless when hurled at a film made by a black filmmaker but if it means that 12 YEARS A SLAVE will help us consider, understand and appreciate aspects of our history that are uncomfortable to discuss or ugly to imagine I think that’s well worth supporting and every one of us (black, white, liberal or conservative) should be sympathetic to the impact that slavery had on America as well as the rest of the world. Many of us are still feeling its effects and the sad fact is that even today some modern business models continue to use management techniques that were originally created by plantation owners. Human trafficking persists as a national as well as universal problem and millions of people still live in what the United Nations refers to as ‘modern slavery.’ The issues that McQueen’s film eloquently addresses have unfortunately not vanished into history.

As for the violence depicted in 12 YEARS A SLAVE, I can only assume that those who find it too ‘gratuitous’ or ‘explicit’ have avoided reading the detailed historical accounts of slave owner practices because the film barely touches on the violent indignities that people suffered. I was grateful that McQueen was willing to show some of the brutality that Solomon Northup witnessed and I appreciate the fact that he made me squirm and want to look away. A film about torture, rape, and the enslavement of human beings should make our stomachs churn and our skin crawl. It should horrify and deeply unsettle us because it’s a horrifying chapter of our shared history.

The film has been unflatteringly compared to the work of horror filmmakers such as William Friedkin and David Cronenberg, as if this comparison is supposed to disparage any serious critical consideration of McQueen’s film. It’s insulting to those of us who appreciate thoughtful horror cinema but it also attempts to restrict our conversation about 12 YEARS A SLAVE. I personally find the comparison of McQueen’s film to Friedkin’s EXORCIST fascinating and worthy of consideration and I can also find parallels between McQueen’s obsession with tormented bodies and the visceral aspects of David Cronenberg’s work but these are compliments, not criticisms. I believe that McQueen, Friedkin and Cronenberg are all thoughtful, passionate, and creative directors who ask audiences uncomfortable questions and often examine complex and even distasteful aspects of human nature that lessor directors like to sweep under the rug. Do they want to shock viewers? Do they enjoy making their audiences squirm? Probably but I would argue that modern cinema is often in dire need of a good shock or a hard kick to its soft rear and I’m glad that some directors are willing to provide us with that.

Before seeing 12 YEARS A SLAVE I, like many other Americans, was unfamiliar with Solomon Northup’s story. As a history buff that’s unforgivable but my ignorance about Northup’s plight speaks to a larger problem in our country involving education and the way our history books often gloss over the more troubling aspects of this Nation’s past. In a recent interview with Steve McQueen, the director expressed his surprise and joy in finding out that Solomon Northup’s 1853 memoir has sold more copies in the last 5 months than it has in its entire 161-year history. That’s an amazing number and confirmation of his film’s power and impact. I don’t think we should judge films simply based on their cultural significance but 12 YEARS A SLAVE has defiantly left its mark on a generation of film viewers and it will be interesting to see how the reverberations of McQueen’s vision shape our conversation about race, the human condition and the history of slavery in America as well as the rest of the world in the future.

Before signing off I’ll leave you with a list of my Top 10 Favorite Films of 2013 originally compiled for the Alliance of Women Film Journalists’ poll. Naturally, it’s limited to the films I’ve had a chance to see.