Decades before Wonder Woman made her feature film debut and the all-female Dora Milaje fighting force was introduced to movie audiences in BLACK PANTHER (2018), Tamara Dobson was winning hearts and kicking-ass with her powerful portrayal of Cleopatra Jones.

Released by Warner Bros. in 1973, CLEOPATRA JONES was the studio’s big-budget response to a slew of popular black-led films dominating the box office (helmed by American International Pictures) and the first action film Warner produced featuring a black heroine. The script was written by Max Julien, a writer, producer, and actor probably best known today for his starring role in THE MACK (‘73). Julien originally hoped that CLEOPATRA JONES would be a star-making vehicle for his girlfriend at the time (actress Vonetta McGee), but after a highly publicized talent search the role ultimately went to the 6′ 2″ model and budding actress Tamara Dobson.

Dobson was a stunning Baltimore-born beauty who moved to New York after graduating from the Maryland Institute College of Art with a degree in fashion illustration. While living in the Big Apple, Dobson began modeling and appeared in Vogue as well as Mademoiselle, Jet, Essence, and Redbook magazine. She also found work in commercials and earned a few screen credits before landing the starring role in CLEOPATRA JONES. To play the part of a resilient female special agent working with the U.S. government to take down a ring of drug smugglers, Dobson began studying martial arts and eventually earned a black belt.

CLEOPATRA JONES is often compared to James Bond and for good reason. Both characters are fearless and refuse to hide their identities from prospective enemies. Cleopatra Jones is a fabulously flamboyant character who drives a dazzling Corvette Stingray that boasts “Cleo” vanity plates. But despite her personal wealth and profession, Cleo is also a champion in her inner-city community where she takes on police corruption and fights to keep drugs out of her neighborhood. As regal as her namesake and no doubt just as lovely, Cleo uses her brains, athletic abilities and a vast array of skills to dispense justice in an unjust world. 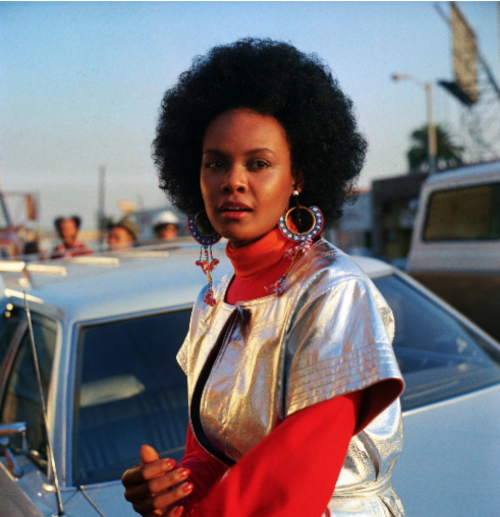 CLEOPATRA JONES features some of the most stunning fashion you’re likely to come across in any 1970s film production thanks to Giorgio di Sant’Angelo. Sant’Angelo was an Italian-Argentinian avant-garde fashion designer based in New York who incorporated ethnic costume components into his work. His designs were typically made with flexible fabrics (perfect for an action heroine!) and included natural elements such as leather and fur. In CLEOPATRA JONES (and its sequel, CLEOPATRA JONES AND THE CASINO OF GOLD [1975]), Dobson models some of Sant’Angelo’s most bold and impressive designs including fur-lined capes and colorful turbans making the movie a genuine visual feast for fashionistas.

The acclaimed jazz musician James Louis “J.J.” Johnson is responsible for the film’s soundtrack. He wrote and arranged the score with help from soul singer Joe Simon, who belts out the film’s powerful theme song that includes lyrics like, “You’re so sweet and strong. Girl you can do no wrong.” The soundtrack also features two songs sung by R&B diva Millie Jackson, “Love Doctor” and “Hurts So Good.” The combination of Afrocentric rhythms, funk-infused grooves, and smooth vocal stylings make it the perfect accompaniment to Cleo’s action-packed adventures and romantic encounters. 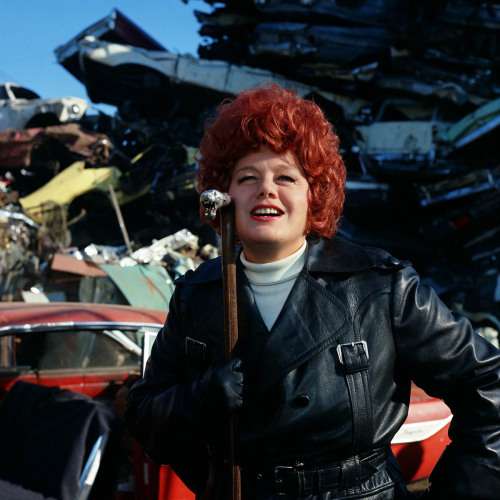 Cleopatra Jones faces down some interesting villains throughout the film but the standout is 53-year-old Shelley Winters as Mommy, a hot-tempered and foul-mouthed drug lord. Mommy is Cleo’s main adversary and Winters dives into the role with gusto. The part is reminiscent of Winter’s Academy Award-winning turn in A PATCH OF BLUE (’65) where she played a violent racist, but she is shriller, funnier, and more over-the-top here. Despite the humor, it is an ugly and unglamorous role that most actors would have turned down but Winters chews up the scenery and manages to make a worthy foe for Dobson during the movie’s climactic final showdown.

Thrill-seeking viewers can now catch up with CLEOPATRA JONES streaming on YouTube and Amazon.

by Kimberly Lindbergs and originally written for FilmStruck in 2018