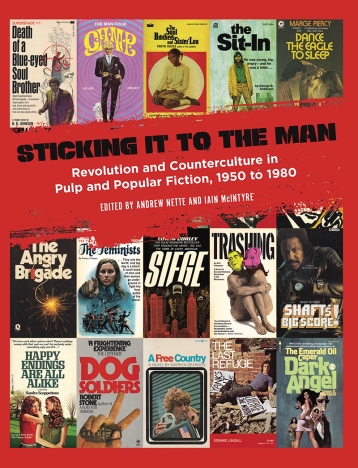 Movies and pulp fiction share a long, rich, and complicated history that deserves more consideration and thoughtful examination. A new book recently released by PM Press and edited by Andrew Nette and Iain McIntyre does just that. Sticking it to the Man: Revolution and Counterculture in Pulp and Popular Fiction, 1950-1980 is dedicated to examining the ways in which the changing politics and culture of the 1950s, ’60s, and ’70s were reflected in the mass-produced budget-friendly literature of the times. But this beautifully designed and lushly illustrated coffee-table-ready volume also provides film fans with an invaluable look at how these books came to shape and inspire many movies and franchises. From the backstreet exploits of Shaft (1971) and Dirty Harry (1971) to the thoughtful examinations of class and race relations in To Sir, With Love (1967) and The Landlord (1970), Sticking it to the Man reminds us that these films all began life as popular fiction.

The 1960s and 1970s were a turbulent and transformative time. Around the globe, social mores and political institutions were being challenged and upended by groups as diverse as the Black Power movement, gay liberation, the New Left and AIM (American Indian Movement). Despite hostile opposition by lawmakers, educational institutions and the media street hustlers, antiwar factions, working-class stiffs, and civil rights activists were able to magnify their ostracized voices in the public sphere and in pulp fiction. But their radical views and unique observations faced a backlash from conservative writers. Inspired by Nixonesque ideals, rightwing word-slingers used pulp fiction to criticize and mock the counterculture. As a result, pulp fiction became a battleground of ideas where black radicals, gays, yippies, and feminists faced off against white vigilantes, renegade cops, and traditional-minded military men. 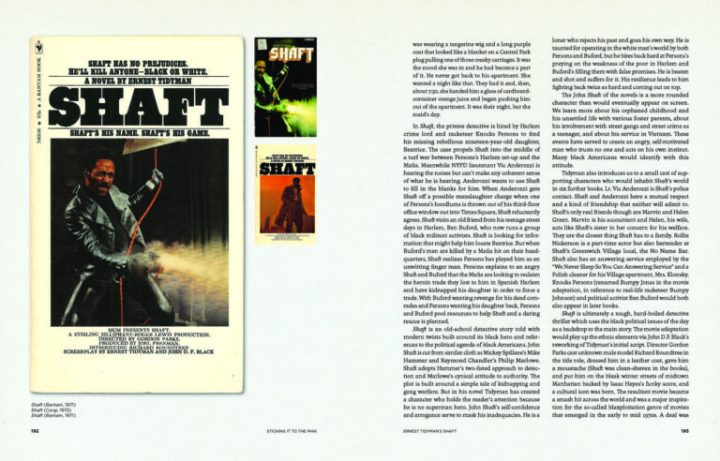 Sticking it to the Man takes readers on a deep dive into this weird and wonderful world with more than 300 full-color reproductions of vintage book cover designs along with interviews, text excerpts, reviews and in-depth analyses of many marginalized authors and their work. The book emphasizes English language writers, specifically fiction from America, Australia and Britain, but despite its limited geographical focus Sticking it to the Man contains an expansive range of subjects and diverse perspectives from scholars as well as culture critics that allows readers to come away with a broad understanding of its subject.

As a film journalist and historian, I appreciated how much background information the book provided on cult movies such as Looking for Mr. Goodbar (1977), Getting Straight (1970), Walkabout (1971), and Across 110th Street (1972) along with popular franchises like Shaft, Dirty Harry, and Death Wish. But I was particularly impressed with the amount of space given to spotlight the work of black authors including Iceberg Slim (The Mack), Chester Himes (Cotton Comes to Harlem), E. R. Braithwaite (To Sir, With Love), Kristin Hunter (The Landlord), Ronald L. Fair (Cornbread Earl and Me), Nathan Heard (Gordan’s War), Donald Goines (Crime Partners), and Marc Olden (Black Samurai). Film critics and scholars too often overlook the contributions of black writers when discussing black cinema to focus on white directors and producers. I would like to think it is not intentional since there is so little information about them readily available but thankfully Sticking it to the Man makes a valiant attempt to change this. As a result, I found myself eager to revisit films based on the work of overlooked black writers with a much deeper appreciation of their stories. 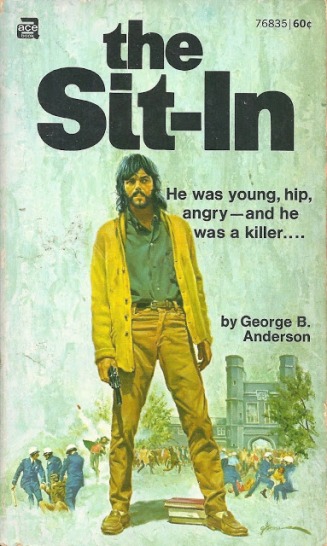 Sticking it to the Man is the perfect last-minute holiday gift for the book lovers and radical revolutionaries in your life but it is also an important read for film fans and scholars. The book is available from Amazon but I recommend purchasing it directly from PM Press. PM Press is currently offering buyers a 50% discount until January 1st with the coupon code GIFT. While there I also recommend picking up the companion volume Girl Gangs, Biker Boys, and Real Cool Cats: Pulp Fiction and Youth Culture, 1950 to 1980 also edited by Andrew Nette and Iain McIntyre.

If you would like to read more about the topic take a trip over to Andrew Nette’s Pulp Curry site where you can find book excerpts along with more in-depth articles, reviews, and author interviews. Andrew is one of my favorite pop culture vultures and his website and Instagram account are a great resource for anyone interested in pulp, popular fiction, and film. Nette is also an accomplished author himself and you can find more information about his fiction output there as well.

Disclaimer: I was given a copy of the book for a fair and unbiased review.