Love is complicated. Some see it as a priceless gift or blessing while others describe it as an unshakeable disease. It can be comforting, enriching, elevating, thrilling and divine. It can also be messy, unruly, feral, ferocious and cruel, particularly if you are suffering from acute depression. In Dans Paris aka In Paris (2006), French filmmaker Christophe Honoré (Ma mère aka My Mother [2004], Les chansons d’amour aka Love Songs [2006], Les Bien-Aimés aka Beloved [2011]) introduces us to a family in the throes of a profound depression although this fact is kept hidden from viewers throughout most of the film’s 90-minute run time. Instead of focusing on the hows, whys and what for’s of the situation, Honoré shows us how each family member is trying to cope and for better or worse, their drug of choice is love.

Honoré’s film is a tattered love letter to The City of Light and French cinema itself recounting one day in the life of a family facing an existential crisis. It begins with Jonathan (Louis Garrel), the youngest sibling of a divorced couple (Guy Marchand and Marie-France Pisier), describing the events which led his older brother Paul (Romain Duris) to leave his lover (Joana Preiss) in the country and return home to the family’s cramped apartment in Paris two days before Christmas. Through Jonathan’s disjointed flashbacks, we get to know Paul and his one-time companion as they make love and war, bickering endlessly over incidents and issues we can only guess at but one thing is certain, Paul is not a happy man. His depression is all-consuming causing him to retreat inward and attempt suicide several times. At first glance, Jonathan seems to be the exact opposite of his older brother. He is a jovial, animated and easygoing young man who romances multiple women within 24 hours. He is the imp that will be our guide through Honore’s tale but Jonathan’s hypersexuality and inability to commit to anything except the family motto of “Take time to ignore the sadness of your family” suggests something is amiss and their father is well aware of it. 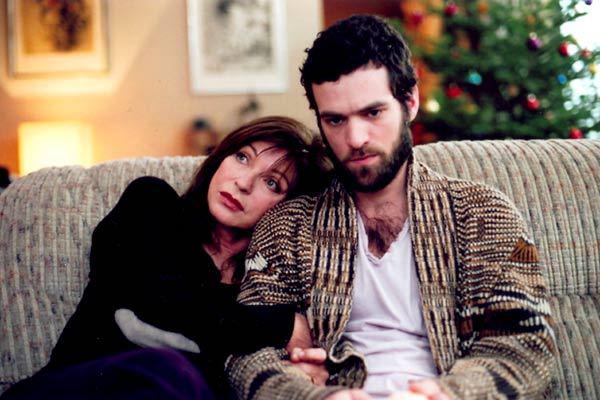 Dad fusses and frets over his two sons, buying them a Christmas tree to lift their spirits, making them comforting chicken soup and urging them to focus on their futures. He is a single parent, left alone to manage his children’s lingering adolescence while his wife whirls in and out of their life leaving joy, confusion and chaos in her wake. The father’s obsessive love for his sons has made him neglectful of his own needs while the mother has selfishly deserted her offspring in order to satisfy her private desires. They are two opposites of the same coin, much like their children, and all are linked together by a horrible event that has left their family beaten and bruised. Paul just happens to be the most visibly shaken by the incident but all are expressing trauma in their own ways. Every member of the family is longing for satisfaction, nostalgic for something unattainable and out of reach, and love in its various guises is their painkiller.

The film, a veiled adaptation of J. D. Salinger’s Franny and Zooey, was shot, edited and released all within six months and the rushed, airy, improvisational tone is apparent. It is also evident that this was a labor of love for Christophe Honoré who was involved in all aspects of the production including choosing his cast, which is excellent. It’s worth noting that Louis Garrel, who stars as the puckish Jonathan, has appeared in six of the director’s films over the last 12-years. Interestingly, Garrel comes from a family of filmmakers. His parents are director Philippe Garrel and actress Brigitte Sy. He’s also the godson of Jean-Pierre Léaud who is probably best known for playing Antoine Doinel in François Truffaut’s beloved series of films comprised of The 400 Blows (1959), Antoine and Colette (1962), Stolen Kisses (1968), Bed and Board (1970) and Love on the Run (1979). In his own way, Garrel has become Honoré’s Jean-Pierre Léaud and has inspired the director to repeatedly explore the delicate mechanics of human relations and the difficulty we have with communicating our feelings.

In another director’s hands, Dan Paris would be a morose and cheerless viewing experience but Honoré understands something vital about the human experience that makes his films bristle with life even when his characters are consumed by melancholy. He knows humor is often a natural coping mechanism in trying times so his films allow viewers to smile and laugh along with his protagonists even when they are challenged by tragedy. In fact, the tragedy is buried in the film’s narrative so deeply that it is often lost amid the Paris streets brimming with cheerful Christmas lights. The director’s playful approach to the material, which rebuffs the one-note tone of so many modern dramas, reflects his deep appreciation for the French New Wave and affection for classic Hollywood films. Dans Paris, beginning with the title credits, abrupt tonal shifts, silent-film gags, numerous film and literary references, the inclusion of off-kilter musical numbers and circular structure, is an assemblage of Honoré’s influences but it avoids the pitfalls of parody. The film is not simply a retelling or Tarantino-style homage to the New Wave, Honoré incorporates, deconstructs, subverts and revives his sources creating something entirely fresh and modern but film buffs can still have fun spotting his references.

– by Kimberly Lindbergs, originally published on FilmStruck in Feb. 2017