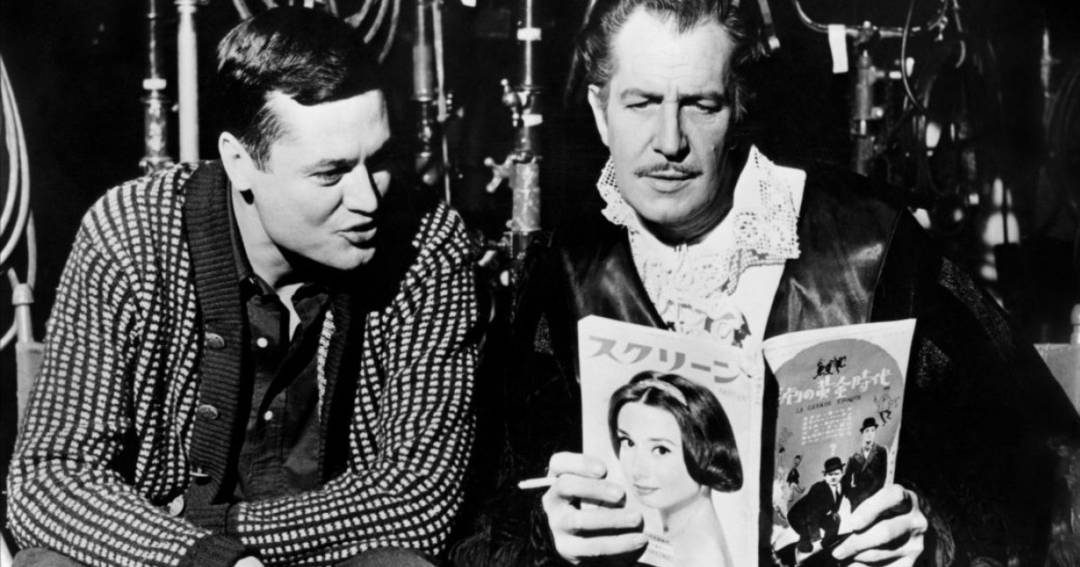 This post was part of my month-long celebration of Vincent Price–TCM’s October Star of the Month in 2013.

Vincent Price will be headlining TCM’s terrific Halloween line-up tonight, which kicks off at 5PM PST/8PM EST with THE PIT AND THE PENDULUM (1961) followed by THE HAUNTED PALACE (1963), THE MASQUE OF THE RED DEATH (1964), THE ABOMINABLE DR. PHIBES (1971), TWICE TOLD TALES(1963), THE TOMB OF LIGEIA (1964) and finally THE CONQUEROR WORM aka THE WITCH FINDER GENERAL (1968). I’ve had the pleasure of seeing all these films before and recommend them without hesitation but if you can only watch a few I suggest setting aside some time to enjoy the Roger Corman films airing this evening, which make for some genuinely thrilling entertainment on All Hallows’ Eve.

Director Roger Corman made an incredible series of horror films with Vincent Price fondly referred to as the ‘Poe Cycle’ today because they’re loosely based on classic Edgar Allan Poe stories. These atmospheric 1960s style gothic tales feature crumbling castles, animated coffins and fog-shrouded cemeteries. They’re drenched in shadows, wrapped in cobwebs and deliver some genuine scares served up on a blood-soaked platter. They also contain some of Vincent Price’s best performances and cemented his name in film history as the reigning “Crown Prince of Horror” and the irreplaceable “Master of Menace.”

Today I thought I’d share some of Vincent Price and Roger Corman’s personal memories about working on the films that will be airing on TCM tonight. Price and Corman always had genuinely nice things to say about each other even when they were critical of the films they made together but their insights and observations are invaluable. They provide us with a window into what it was like to work on low-budget horror films shot in just two or three weeks. Today these films often seem so much richer and imaginative than their modern-day big-budget counterparts and I think that’s due to Corman’s ingenuity and the dedicated performances of all the actors involved, particularly Corman’s leading man.

Vincent Price struts and preens through these period productions with complete confidence while brandishing a wicked Cheshire cat-like grin and arched eyebrows as sharp as steeples. He seems to relish every moment that he’s in front of the camera and no matter how bizarre and bloody the proceedings get, Price offers us a steady hand and a distinct voice to guide us through Corman’s creative take on Poe’s macabre tales.

“In Vincent, I found a man of cultural refinement… He was a first-rate actor and handsome leading man who had a distinguished career. I felt audiences had to fear the leading man but not on a conscious physical level based on strength. I wanted a man who’s intelligent but tormented mind works beyond the minds of others and who thus inspires a deeper fear.”
– Roger Corman from How I Made a Hundred Movies in Hollywood and Never Lost a Dime

“Roger had a quiet authority on set and a definite psychological approach to Poe films that we talked about at great length. Roger’s intensity on the set made up for the fact that these were low-budget, short schedules. He asked us very coyly to visit the sets before shooting, discussing the film in situ to get us acquainted with each other and the sets.”
– Vincent Price from How I Made a Hundred Movies in Hollywood and Never Lost a Dime

“I enjoyed THE PIT AND THE PENDULUM because I actually got the chance to experiment a bit with the movement of the camera. There was a lot of moving camera work and interesting cutting in the climax of the film.”
– Roger Corman from The Films of Roger Corman: Brilliance on a Budget

“Roger did make pictures very quickly, but they were made throughly. They were brilliantly designed and brilliantly thought out. He was one of the best directors I ever worked with in my life.”
– Vincent Price from Vincent Price

“Vincent required very little from the director. He, as all good actors do, researched, prepared and studied. In general I would talk with Vincent before each picture so that we were in unity on the words that have almost become clichés–the motivation, the subtext–so that we would evolve and define the character before the picture started. Once having done that, Vincent came to the set prepared and was wonderful to work with.”
– Roger Corman from Vincent Price: A Daughter’s Biography

“A wonderful thing happened during the making of the film (THE HAUNTED PALACE; 1963). Our director, Roger Corman, decided that every time I looked at a portrait of my grandfather, I should turn green. Well, that’s easy enough to talk about, it means that every time I looked at the portrait I had to run out and put a little more green make-up on… Well, he forgot to tell the lab that developed the film, about the green make-up. And on day one, the rushes were about four days late, and he called up, and they said, ‘We can’t send this film back. Vincent Price keeps turning green all the time!’”
– Vincent Price from The Price of Fear

“MASQUE was the most lavish of the Poe films. I used terrific sets left in the scene docks from BECKET (1964) and other historical epics and used some fabulous costumes. Also, my cinematographer was Nicolas Roeg, whose work on the film won him a Best Cinematography award from a major European film festival. I had a five-week schedule, though with slightly slower U.K. crews, it was actually closer to four U.S. weeks. And I still regret my decision not to pay extra mandated union fees for going over one day at Christmastime. I still feel that would have made the large scale ball sequence-with dozens of extras, plenty of fire, and lots of action–a true tour de force instead of just a good sequence.”
– Roger Corman from How I Made a Hundred Movies in Hollywood and Never Lost a Dime

“My greatest respect for him (Roger Corman) was for his wisdom in choosing the best people in various fields of the arts to launch his career. He had a crew that loyally followed him from film to film… The make-up people, the special effects people–we all worked together on those Poe films and Roger achieved, through his appreciation and use of all their talents, and I might add, the talents of the actors young and old who believed in him, something very similar to the unity and dedication that once existed under the old studio system. It was also because of this mutual dedication and admiration that these films could be made as cheaply and quickly as they were.”
– Vincent Price from The Films of Roger Corman: Brilliance on a Budget

“They had coated all the walls with liquid cement, that emits a gas after it’s been applied. The set (of TOMB OF LIGEIA; 1964) was filled with gas. We were all warned. Don’t smoke. Don’t light a match. Elizabeth (Shepard) and I were positioning ourselves under the debris. Just before the cameras were supposed to roll, some idiot walked in and lit a match. The whole set went up. I was petrified. I dragged Elizabeth out of there as fast as I could. The whole set was ruined. The cameras weren’t rolling. We had to start over from scratch.”
– Vincent Price from The Films of Roger Corman: Brilliance on a Budget

“This (TOMB OF LIGEIA; 1964) was the first Poe movie to be filmed on natural locations… I was getting tired of shooting on those cramped stages. For the first time we brought the world of Poe into the world of reality. ”
– Roger Corman from The Films of Roger Corman: Brilliance on a Budget

by Kimberly Lindbergs, originally written for TCM.com and published on October 31, 2013