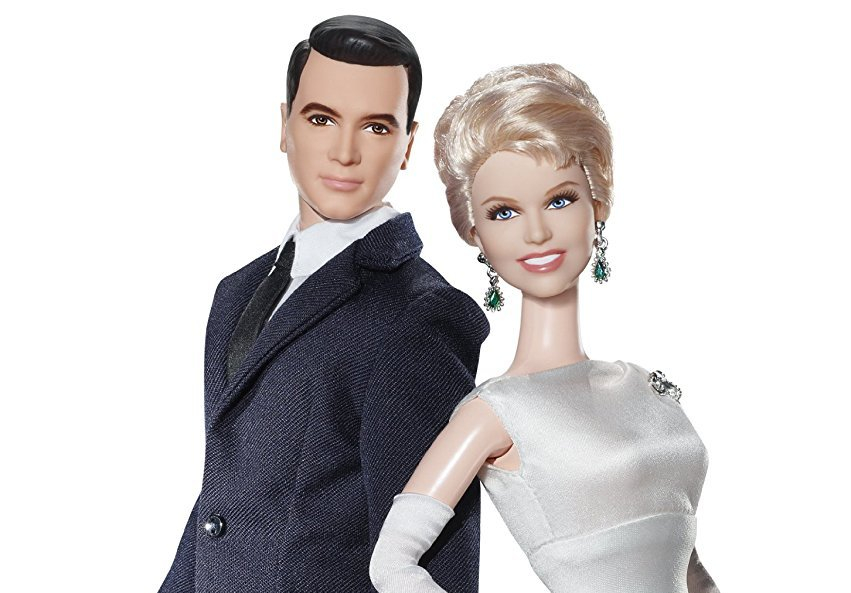 I have a confession to make. I like dolls. A lot. I’ve been a casual collector for many years and I’ve also written about dolls for a few publications. I usually keep my fascination with classic films and dolls separate but it’s not easy trying to compartmentalize your interests. The film fans I’ve met often find dolls childish, trivial or just plain creepy. And the doll fans I’ve met rarely seem to enjoy the same classic movies that I do. But occasionally these two interests collide and thanks to Mattel they’ve been colliding a lot in 2011.

It all started with Mattel announcing their PILLOW TALK gift set featuring Doris Day and Rock Hudson as Barbie and Ken from Michael Gordon’s classic romantic comedy. I’ve become very fond of Doris Day in recent years and I’ve always liked Rock Hudson so I was delighted by the idea of these two actors being turned into fashion dolls. After seeing photos of the dolls it looks like Mattel did a great job of capturing their likenesses and the colorful retro-style packaging of the PILLOW TALK gift set should definitely appeal to fans of the 1959 film. According to an interview at the Doris Day Tribute site with Mattel Marketing Director, Liz Grampp, Doris Day has been one of the company’s most requested celebrity dolls.

Doris Day was a style icon during the early 1960s so it’s not a surprise that classic movie memorabilia collectors, as well as doll collectors, have been clamoring for a doll resembling the star. She comes dressed in a miniature version of the white gown she’s seen wearing in the film, which was originally designed by the Oscar-winning costume designer Jean Louis (A Star is Born; 1954, The Solid Gold Cadillac; 1956, Bell Book and Candle; 1958, etc.). In a smart marketing move, Mattel decided to pair Doris with her longtime friend and acting companion Rock Hudson and the PILLOW TALK Barbie gift set was born. Doris Day shared her own thoughts about being turned into a Barbie doll on her personal website recently saying, “I just loved Jan Morrow (her character in PILLOW TALK). She was so spunky and stylish. And working with Rock was always a joy. He was an honest-to-goodness doll!”

For more than 50 years Mattel has been making pop culture history and their celebrity Barbie dolls have become highly collectible. It all started in 1967 when Mattel decided to create a Twiggy Barbie based on the famous British model and actress. Since then Mattel has gone on to create many celebrity Barbie dolls based on film and television personalities including Elizabeth Taylor, James Dean, Marilyn Monroe, Elvis Presley, Vivien Lee, Audrey Hepburn, Barbra Streisand, Diahann Caroll, Lucille Ball, Julie Andrews and Dick Van Dyke.

One of my favorite recent Mattel creations was their Alfred Hitchcock’s THE BIRDS Barbie modeled after the film’s star, Tippi Hedren. The doll came dressed in a miniature version of the green suit dress that Hedren wore during the movie that was originally designed by the renowned Oscar-winning costume designer Edith Head (All About Eve; 1950, Roman Holiday; 1953, Vertigo; 1958, etc.). The packaging looked like a set design and the Hedren doll was posed with one arm above her head fending off the small plastic toy birds that came with her. It was an ingenious creation and definitely not made for kids but as a Hitchcock fan who happens to think that THE BIRDS (1963) is one of the director’s best films naturally, I had to have one. Not surprisingly, THE BIRDS Barbie doll went on to win the Rondo Hatten Classic Horror Award for the Best Toy, Model or Collectible in 2009.

Mattel recently found inspiration in another classic Alfred Hitchcock film and last month they released a TO CATCH A THIEF Barbie doll modeled after actress Grace Kelly. The lovely doll looks a lot like Kelly and is wearing the blue gown that Edith Head designed for her in the 1955 film. Like THE BIRDS Barbie, the TO CATCH A THIEF Barbie also comes in an especially designed box that looks like the Hotel Carlton in Cannes where Hitchcock’s film was shot. And if that isn’t enough, Grace Kelly fans can look forward to two Silkstone Collection Barbie dolls based on Kelly that will be released in August and October later this year.

The first is called the “Grace Kelly Bride Doll” and she’s dressed in a miniature version of the world famous wedding gown Kelly wore when she married Prince Rainer of Monaco. Another Oscar-winning costume designer by the name of Helen Rose (The Merry Widow; 1952, I’ll Cry Tomorrow; 1955 and The Bad and the Beautiful; 1952) designed Kelly’s original wedding dress. And finally, Mattel will be releasing the “Grace Kelly Romance Doll” featuring Kelley dressed in the outfit she wore at the Canes Film Festival in 1955 when she met Prince Rainer but this dress had much more humble beginnings. It was simply an “Easy to Sew” dress based on a McCall pattern that Grace Kelly had modeled for McCall Magazine.

Barbie isn’t without her critics and I can only imagine what they might have to say about a fashion doll based on a Hollywood Princess that lived a charmed life but died much too young. I’ll leave that debate and deep analysis to someone else. In the meantime, I’ll be saving up my pennies for a TO CATCH A THIEF Barbie. I’ll also be keeping my eye out for other Barbie dolls inspired by the “Master of Suspense.” Maybe we can look forward to a VERTIGO Barbie modeled after Kim Novak in the future? Or a SPELLBOUND Barbie modeled on Ingrid Bergman and packaged in a Salvador Dali inspired box? You can bet that they’d be on my Christmas wish list!

Links to where you can purchase these classic Hollywood-inspired dolls:
– Doris Day & Rock Hudson

by Kimberly Lindbergs, originally written for Turner Classic Movies and published in July 2011