When Jane Birkin (Blow-Up [1966], Wonderwall [1968], La Piscine [1968], Don Juan (or If Don Juan Were a Woman) [1973], Je t’aime moi non plus [1976], Death on the Nile [1978], La Belle Noiseuse [1991])) was getting ready to celebrate her 40th birthday in 1986 she confessed to filmmaker Agnès Varda, that she had reservations about growing older. Varda, who was almost 60-years-old at the time, told Birkin that she was about to enter a wonderful phase in her life and asked if she could shoot a cinematic portrait of the actress, filmmaker, model and chanteuse that demonstrated her evolution. After some coaxing, Birkin agreed and together the two friends crafted the creative docudrama Jane B. par Agnès V. (1988) currently streaming on FilmStruck as part of The Masters: Agnès Varda collection.

This imaginative account of Jane Birkin’s life blends interviews with personal and professional anecdotes while placing her in artistic dioramas and fabricated film roles. It is a fascinating collaboration between a director and their star that forgoes typical documentary tropes and constructs new and somewhat radical ways to present its subject. Like a butterfly emerging from its cocoon, the lithe and lovely Birkin mutates before our eyes. She is the subject of Renaissance paintings, the heroine of Greek myths and the star of various short films that depict her as Calamity Jane, Jane Porter (from Tarzan) and Joan of Arc among other colorful characters. In my favorite sequence, Birkin imitates Stan Laurel of the silent cinematic duo Laurel and Hardy while the versatile Laura Betti (La Dolce Vita [1960], Teorema [1968], Hatchet for the Honeymoon [1970], The Canterbury Tales [1972], 1900 [1976], Fat Girl [2000]) portrays Hardy. The two women are so funny and charming in their gender-defying roles that it made me wish they had gotten the opportunity to appear in a comedy together.

Cold, hard reality is rarely allowed to intervene with the whimsical proceedings. However, we do get a more intimate look at Birkin when she interacts with her lovers (Serge Gainsbourg & Jacques Doillon) talks about her children (Kate Berry, Charlotte Gainsbourg & Lou Doillon) and reflects on her own upbringing in Britain but these moments are short-lived. In turn, Birkin’s childlike personality appears manufactured and superficial at times but amid the artful ambiance and playful performances, she occasionally lets her guard down. We get a glimpse of the complex woman Birkin truly is in fleeting moments when the actress confronts the director, talks about her fears or confesses her writing aspirations but she is a mass of squirming contradictions. She is a woman who claims to be most comfortable wearing old jeans and slouching t-shirts but regularly flaunts a Hermès Birkin bag (named after the actress) that cost anywhere between $8000-$150,000. 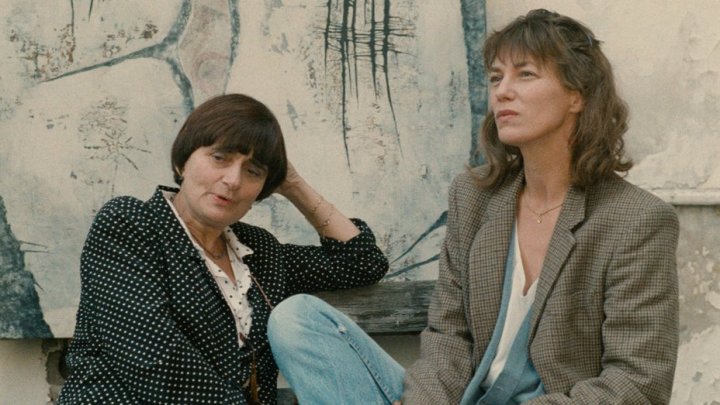 Agnès Varda is visibly inspired by her subject and in Jane B. par Agnès V. her camera seductively caresses every sharp edge and gentle curve of Birkin’s body. After establishing an intimacy between Birkin and herself, Varda proceeds to dismantle the actress’s external facade to expose her rich interior. In the process, we meet Birkin the loving mother, Birkin the homemaker, Birkin the clown, Birkin the romantic, Birkin the model, Birkin the singer and Birkin the performer within the span of this multilayered docudrama but her ambiguous nature makes her difficult to define.

As the film fluctuates between fact and fiction, Birkin’s butterfly-like persona finds its wings and takes flight in all directions. She can’t be pinned down or captured and Varda seems to relish Birkin’s instinctive desire to remain free. While it can be appreciated as a fascinating piece of feminist filmmaking that liberates the female gaze, Jane B. par Agnès V. is no stale museum piece. This is a lively and dynamic film that illuminates its subject and is just plain fun to watch.

This was Varda’s 26th film and her 10th documentary. Since then, she has focused almost exclusively on documentary filmmaking but in Varda’s world reality is never dreary or mundane. The innovative director who has been called the “Grandmother of the French New Wave” has always maintained a playfulness and air of mischief in her work even when she is addressing serious topics such as terminal illness or homelessness. Is it any wonder that impish-Varda and the spirited Birkin are friends? The two seem to understand and identify with each other’s puckish personalities.

Whether you are a longtime fan of Jane Birkin or someone eager to discover one of Britain’s most provocative and charming expats, you should find Jane B. par Agnès V. a rewarding watch.

by Kimberly Lindbergs, originally written for FilmStruck and published in March 2017