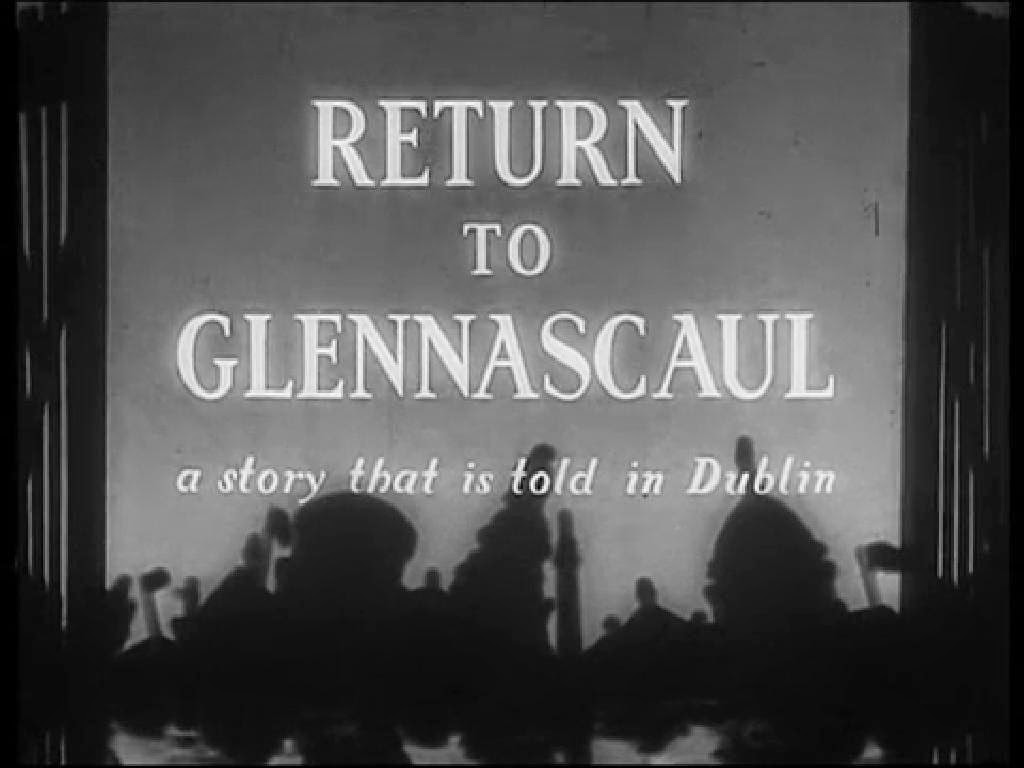 I love a good ghost story and some of the best ones ever written have come from the hearts and minds of Irish authors but very few of them have been adapted for the screen. Horror movies set in Ireland that feature an Irish cast are a rare commodity, which makes RETURN TO GLENNASCAUL (1953) all the more special. This short supernatural film featuring Orson Welles is a real treat for horror fans as well as anyone looking for a something unusual to watch on St. Patrick’s Day.

RETURN TO GLENNASCAUL (aka Orson Welles’ Ghost Story) was made during the filming of Orson Welles’ OTHELLO (1952) and directed by Welles’ longtime friend and collaborator Hilton Edwards who was one of the founders of the esteemed Gate Theatre in Dublin where Welles started his acting career. The two men had become extremely close over the years and Welles’ had given him the part of Brabantio in his adaptation of Shakespeare’s play. During the making of OTHELLO Edwards was forced to return to Dublin to take care of some business at the Gate Theatre but before he left he was able to convince Welles to appear in a short film he wanted to make while he was there. The film was called RETURN TO GLENNASCAUL and it’s an effective little ghost story featuring Orson Welles playing himself. Welles only appears in the opening and closing minutes of the film but he also narrates the tale and it’s easy to assume that he had a hand in directing it as well. Hilton Edwards had never made a film before and RETURN TO GLENNASCAUL would be his last. Once you watch this 23-minute movie it’s easy to spot Welles’ influence on the production. From the shadowy figures framed by imposing doorways to the melancholy mood of decay, disrepair, and weatherworn rot that permeates the film, RETURN TO GLENNASCAUL seems like a natural and harmonious continuation of Welles’ previous work.

The tale it tells will be familiar to anyone who has ever sat around a campfire telling ghost stories at night but it’s given an edgy ambiance thanks to the stellar direction and Welles’ imposing narration. It begins with Welles driving down a dark road in the Irish countryside where he spots a man named Sean Merriman (Michael Laurence) struggling to get his car started. Welles offers him a lift into Dublin and on the way there that man tells Welles a strange and fascinating tale about two women who he had offered a ride to years earlier. The women turn out to be a mother and daughter and they ask Merriman to take them to their Dublin home, which happens to be a lovely estate called Glennascaul. While Merriman’s there he drinks some whiskey and exchanges stories with the two ladies. Before dawn, he decides to leave but promises to come again soon. On his drive home, he suddenly realizes that he’s forgotten his cigarette case so he quickly decides to go back for it but when he returns to Glennascaul the place is merely a shadow of its former self. The grand old house is in ruins and the rusty gate and overgrown garden suggest that no one has lived there for decades.

A few things that make RETURN TO GLENNASCAUL essential viewing are the impressive location shots of Dublin and the talented Irish cast that brings the story to life. Michael Laurence (FOR THEM THAT TRESPASS, OTHELLO, WILLIAMSBURG: THE STORY OF A PATRIOT, Etc.) stars in the film and he does a good job of bringing a level of gravitas and unspoken yearning to the proceedings. I also appreciate Helena Hughes’ portrayal of the spectral Lucy who captures Sean Merriman’s heart with her mournful glances. And of course the cinematography by George Fleischmann is also noteworthy but as I mentioned before, the film appears to have Welles’ fingerprints all over it.

Orson Welles narrated a similar radio drama in 1941 during his time with The Mercury Theater. The play was called The Hitchhiker and it was written specifically for Welles by screenwriter Lucille Fletcher (wife of composer Bernard Herrmann). It tells the story of a ghostly hitchhiker who follows an unsuspecting driver on a road trip across the country. The Hitchhiker was also adapted for television by Rod Serling and it became one of the most memorable episodes of The Twilight Zone. RETURN TO GLENNASCAUL has its own twists and turns as well as a distinct and ghostly Gaelic atmosphere but it’s highly likely that the film was at least partially inspired by Welles’ performance in that original Mercury Theater play.

Horror fans have complained that unlike The Hitchhiker, RETURN TO GLENNASCAUL takes a lighthearted turn at the end. But this was typical of many early thrillers and I don’t find its mild humor distracting. What remains with me after viewing the film multiple times is the eerie ambiance, whispering voices and dramatic framing that suggests a supernatural take on lost love, regrets, human corrosion and the deterioration of time and place that Welles explored beautifully in THE MAGNIFICENT AMBERSONS and CITIZEN KANE. Watching RETURN TO GLENNASCAUL makes me wish that Welles had devoted more attention to the paranormal and adapted one of Sheridan Le Fanu or Charlotte Riddell’s ghost stories for the screen.

RETURN TO GLENNASCAUL is currently available to watch on Youtube. If you haven’t had the opportunity to view this enchanting Irish ghost story I highly recommend giving it a look. It’s the perfect evening viewing for ghost lovers or anyone celebrating St. Patrick’s Day.