Joan Bennett got her start in Hollywood as a lovely, demure, fair-haired ingénue but made her mark as a sexy, feisty, dark-haired femme fatale. Her transformation was atypical in Tinseltown where many natural brunettes such as Carole Lombard, Lana Turner, Marilyn Monroe, and Jayne Mansfield, found success after becoming bottle blonds. Bennett’s makeover happened during the production of Trade Winds (1938), an amusing crime-drama where she plays a woman on the run from the law who is forced to change her appearance. She looked so striking as a brunette that she was inundated with fan mail after the film’s release and got professional approval from the National Hairdresser Association, which publicly admired her exotic new ‘do.

Critics disapprovingly compared her to Hedy Lamarr (and still do today) but according to the actress’s autobiography (The Bennett Playbill), she relished the idea of escaping the “bland, blond, innocent” image that had dogged her and the change of appearance brought about a newfound personal and professional confidence. Afterward, Bennett became politically active, fell in love with producer Walter Wanger and began a creative partnership with director Fritz Lang that would forever alter the trajectory of her career. 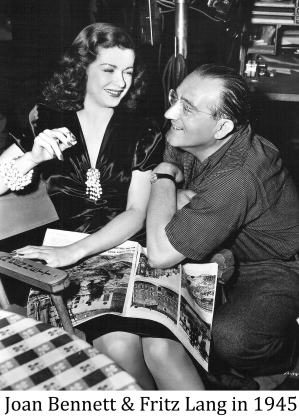 Joan Bennett and Fritz Lang first teamed-up during the making of Man Hunt (1941), a Twentieth-Century Fox WWII thriller about a British big game hunter (Walter Pidgeon) who is captured by German soldiers while attempting to assassinate Adolph Hitler. The German’s plan to kill him and make his death look like an accident but he escapes and is pursued by authorities. When he returns to England, he meets a sassy streetwise cockney girl played by Bennett who helps him avoid capture.

Before making the film Bennett trained extensively with a voice coach to perfect her accent but she had trouble with the tricky dialect. Despite this, her performance is one of the film’s bright spots and Bennett is so eye-catching she manages to steal every scene she’s in. This is partially due to her natural charm, earthy sensuality, and stunning beauty but credit also has to go to Lang who brought out the best in the 30-year-old actress. Lang seemed to know exactly how to photograph her and according to Bennett, he continually pushed her to focus, memorize her lines and take risks that enriched her performance.

In Hollywood, Fritz Lang was considered somewhat of a tyrant on set and developed a nasty reputation among actors who found him difficult or impossible to work with. Bennett seems to have triggered something maternal, sympathetic or amorous (rumors of an affair circulated on set) in the director. In her autobiography, Bennett described Lang as, “exacting and demanding . . . sometimes abrasive.” She also explains that she had great respect for his talents adding, “I performed better under his direction than at any other time in my career” and she praised the “great working rapport” they shared. As for Lang, he told an interviewer in 1969 that, “Joan Bennett was wonderful to work with and I enjoyed it very much.”

Their next project was another wartime drama titled Confirm or Deny (1941) but Lang fell ill during shooting and after two weeks he was forced to abandon the film. During this period Lang was also getting tired of wrestling studio head Darryl F. Zanuck for artistic control of his pictures and decided to part ways with Twentieth-Century Fox. It would be another three years before Bennett and Lang worked together again but when they finally reunited at RKO to make The Woman in the Window (1944), it heralded a new chapter in their creative partnership.

The Woman in the Window is one of Fritz Lang’s best Hollywood era films and it established Joan Bennett as a formidable screen siren. This seminal film noir stars Edward G. Robinson as Richard Wanley, an aging criminology professor suffering from a midlife crisis who spots a portrait of a woman in a gallery window and is bewitched by her beauty. When he finally meets the dark-haired temptress in the painting, he discovers that her name is Alice (Joan Bennett) and the two share a few drinks at a nearby bar before she invites Wanley to her apartment to continue their conversation. Their verbal foreplay is interrupted when Alice’s wealthy paramour (Arthur Loft) arrives unexpectedly and explodes in a jealous rage. This leads to a violent confrontation and Wanley is forced to kill him in self-defense. Afterward, Wanley and Alice conspire to cover up the murder but a corrupt ex-cop (Dan Duryea) suspects them of the crime and blackmails the twosome. A determined district attorney (Raymond Massey) is also breathing down their backs but before he can finger any suspects, the film takes some surprising turns.

When The Woman in the Window was released it received mixed reviews from critics who debated the film’s surprise ending. However, they all seemed to agree that the performances were top-notch and many singled out Bennett as the seductive Alice who leads Edward G. Robinson’s character down a dark and dangerous rabbit hole. Bennett is stunning in her barely-there blouses and clingy negligees but she’s much more than just eye-candy. She carved out a unique place for herself in film history while she was in front of Lang’s devoted camera. As she sips cocktails, bats her long lashes at male costars and attempts to outwit her on-screen adversaries, Bennett effortlessly takes her place among cinema’s most memorable femme fatales.

After the film’s encouraging reception, Lang along with Bennett and her husband, producer Walter Wanger, decided to form Diana Productions (named after Bennett’s eldest daughter). Their professional alliance allowed them to further explore their creative ideas and inspired them to reunite the cast of The Woman in the Window for another crime thriller, the formidable Scarlet Street (1945).

In this remarkably dark noir, Bennet plays Kitty “Lazy Legs” March, a gorgeous street hustler who seduces a humble clerk named Chris (Edward G. Robinson) with artistic ambitions. Thinking he’s a celebrated painter with money to spare, Kitty claws her way into Chris’s life and he naively begins to devote himself to her unaware that she’s romantically attached to a petty con named Johnny (Dan Duryea). This complicated love triangle ends tragically for all but the ride is well worth taking.

Scarlet Street is a stellar example of 1940s film noir and arguably Lang’s finest contribution to the genre. It also provided Bennett with what is probably her most celebrated role. Kitty is the ultimate dangerous dame, a leggy, sharp-toothed, feline beauty that is rotten at the core. In the end, she is brutally punished for her lack of compassion and callous greed but it’s difficult to despise her. Kitty’s hunger for a better life is palpable and her desperation is a symptom of the abusive relationship she’s trapped in with her boyfriend. Chris just happens to be the poor sap that crosses her path but her prey could have been any gullible Tom, Dick or Harry. In Lang’s films fate typically has the final word but it’s Kitty’s cloying purr of “Jeepers, I love you” that lingers in Scarlet Street, like a siren’s call.

Lang and Bennett would only make one more film together under the Diana Productions banner, an artsy psychological thriller with gothic overtones titled Secret Beyond the Door (1948). The film has been erroneously labeled a failure since its release and modern critics often parrot this negative assessment but it’s an unusual underrated gem that’s ripe for rediscovery.

Unfortunately there were many disagreements on set during the production of Secret Beyond the Door, which caused conflict between Lang and his female protégé. Bennett was reportedly frustrated when the director insisted she do all her own stunts, including running through a burning building multiple times while they ere shooting the film’s fiery climax. Bennett was also bothered by Lang’s proposal to have her voiceovers dubbed by another performer so she went behind his back and got studio support from the film’s distributor (Universal International) to override his decision.

In the meantime, Lang was busy battling writers and producers to get his vision on screen. When the film was released, Lang and Bennett were both troubled by its inability to find an appreciative audience and in later years they often talked despairingly about the outcome, which led to the dissolve of Diana Productions. But despite the outcome and poor critical reception, Secret Beyond the Door is an impressive addition to their joint filmographies and a fascinating conclusion to one of Hollywood’s most curious collaborations. Regardless of their artistic differences during production, Lang and Bennett remained close and were both justifiably proud of their creative partnership.

In Bennett’s autobiography published in 1970, she recalled their time together fondly revealing “To me, Fritz Lang remains one of the great directors in the history of the business, and working with him was a fascinating exercise in the art of making motion pictures. On occasion, whenever he makes a trip to New York from his home in California, we still get together for a delightful evening of do-you-remember-when and the-trouble-with-you-was.”

The Woman in the Window, Scarlet Street and Secret Beyond the Door are recommended viewing for all film noir fans. This superb triple feature is an extraordinary example of the genre but it also provides a window into the creative world of a celebrated director and the actress who became his muse, artistic ally, and lifelong friend.

by Kimberly Lindbergs, originally written for FilmStruck on January 26, 2017.