While recently rewatching Michelangelo Antonioni’s L’Eclisse (aka The Eclipse, 1962) I received the sad news that George Romero had died. The celebrated Italian art-house auteur and the American director behind the hugely popular Living Dead franchise aren’t typically associated with one another but I suspect that Antonioni’s work may have inspired Romero early in his career.

In The Cinema of George A. Romero: Knight of the Living Dead, author and film studies professor Tony Williams asserts that the frustrated married couple holed up in a shopping mall surrounded by hordes of zombies in Dawn of the Dead (1978) resembles the dissatisfied bourgeois couples that listlessly maneuver through Antonioni’s early films. Williams explains that these survivors of Romero’s zombie apocalypse “exist in a world of boredom as a result of their access to a world of conspicuous consumption.” It is an astute observation and one that I can appreciate.

In their own unique ways, Antonioni and Romero both addressed the capital-driven corrosion of modern society through alienated characters facing an existential crisis. Their means and methods may have been different but underneath Antonioni’s slick surfaces and carefully coiffed characters, there is an element of mystery along with heightened anxiety and a sense of profound dread. These are qualities found in many horror films, including the best work of George Romero, and they are at the forefront of L’Eclisse.

L’Eclisse is part of Antonioni’s loosely defined trilogy that also includes L’Avventura (1960) and La Notte1 (1961). These films, along with many of the director’s other works, are united by their shrewd critiques of capitalism, elevation of the arts and emotionally remote protagonists who occasionally resemble the walking dead while they toil and trudge through their daily life. As Antonioni developed his themes his work became more ambiguous and refined. Consequently, L’Eclisse is arguably the most potent and penetrating film in this cinematic cycle.

Monica Vitti was the director’s on and off again muse for 20-years beginning in 1960 with L’Avventura and ending with Il mistero di Oberwald (1980). In L’Eclisse she portrays Vittoria, a translator who breaks up with her longtime lover (Francisco Rabal) at the film’s start and begins an affair with a prosperous stockbroker named Piero (Alain Delon). The couple meet during Italy’s postwar economic boom on the frantic floor of the Rome stock exchange where Vittoria’s mother (Lilla Brignone) spends her days agonizing over her fluctuating bank account.

Their amorous affair is brief and strung together by somnolent walks through desolate suburban streets punctuated by piercing glances and occasional outbursts of passion. When we last see Vittoria and Piero on screen they agree to meet again near a neglected construction site where a new multistory building is being erected but neither of them arrives at the designated spot. Instead, Antonioni ends his film with a poignant montage of images that act as grave markers commemorating the passing of their disregarded relationship. 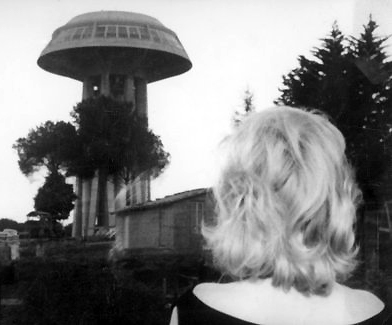 Towering over these events is a mushroom cloud-shaped structure2 that occasionally appears in the background (at the time a piezometric water tower and now the historic Ristorante Il Fungo) hinting at the protagonists’ unspoken fears. Antonioni includes many representations of death and destruction throughout his film.

The stock market, which is at the center of most of the film’s action, was built on the ruins of a Roman temple and remnants of the ancient structure can still be spotted among the bustling businessmen who occupy the once sacred space. In Vittoria and Piero’s family homes their childhood bedrooms resemble tombs in a state of perpetual infancy and Antonioni’s camera lingers on portraits of their deceased relations that peer out quizzically from behind ornate frames. In one particularly gloomy scene, Piero’s luxurious sports car becomes a coffin for a would-be thief. We also watch helplessly as water, most likely laden with toxins from the abandoned construction project, slowly seeps into the ground signaling that there is environmental destruction taking place out of sight with less immediate impact than an atomic bomb but equally as devastating. L’Eclisse may not be a conventional horror film but it contains many chilling scenes accentuated by a gloomy discordant score composed by Giovani Fusco.

As I pointed out in my piece on Red Desert (1964) earlier this year, one of Antonioni’s greatest strengths was his ability to juxtapose images that awe and repel in equal measure. It’s a unique skill that’s often apparent in the work of Italian filmmakers such as Federico Fellini (8 ½ [1964], Juliet of the Spirits [1965], Spirits of the Dead [1968]) and Dario Argento (The Bird with the Crystal Plumage [1970], Deep Red [1975], Suspiria [1977]). Antonioni regularly expressed his admiration for the industrialized world, finding unexpected beauty in modern structures and manufactured landscapes but he also treated these man-made forms as harbingers of doom and symbols of extravagant waste. By disregarding traditional Hollywood storytelling methods, Antonioni created his own distinct cinematic language with architecture.

The director’s visual linguistics are so striking that it’s easy to overlook the sensitive performances he’s able to mine from his actors. Vitti and Delon are both breathtakingly beautiful, easily one of cinema’s most stunning screen couples, and they are in top form as Vittoria and Piero. Their onscreen chemistry is so electric that you’d be forgiven for thinking that their romance was more than an illusion. It often feels as if we’re flies on the wall watching their love blossom, wither and quickly expire in the course of a few short days. Delon’s Piero is effortlessly animated, full of youthful energy and easily aroused but his temperature runs cold. He exhibits a heartless disregard for his fellow man and an adolescent’s view of death that visibly disgusts Vitti’s Vittoria. But her character possesses her own flaws.

During one of the film’s most controversial scenes, we visit an apartment owned by a white colonialist raised in Kenya (played by the acclaimed photographer Mirella Ricciardi) who refers to the natives as “monkeys.” During this uncomfortable encounter Vittoria naïvely dons blackface and mimics the movements of traditional African dancers. Antonioni’s camera doesn’t shy away from exposing the racism lingering underneath the façade of bourgeois society but he contrasts their abhorrent behavior with stunning photographs that illustrate the natural beauty of the African continent and its people.

Racism along with apocalyptic visions, sudden death, environmental degradation, human isolation and the impact of rampant capitalism are crucial elements that define L’Eclisse. Coincidentally (or not?3), they are also subjects that George Romero regularly examined and critiqued in his zombie films.

Endnotes:
1. In La Notte, the film’s stars (Marcello Mastroianni and Jeanne Moreau) have an interesting conversation following a disturbing encounter with a zombie-like nymphomaniac. During their exchange, Moreau’s character suggests that “The Living & The Dead” should be the title of her husband’s next book.

2. Two years after L’Eclisse was released, Ubaldo Ragona and Sidney Salkow revisited the locations Antonioni used in his film while making their exceptional horror feature The Last Man on Earth (1964) starring Vincent Price. This Italian adaptation of Richard Matheson’s I Am Legend (remade as The Omega Man in 1971 and I Am Legend in 2007) depicts a vampire apocalypse and shares much in common with Romero’s Night of the Living Dead (1968). In fact, many believe it was the basis of Romero’s first film.

3. In a 2012 interview with Sean Smithson for Screen Anarchy Romero said, “My (college) friends and I went to see all kinds of European films, more-so than the American stuff. There were screens that would only show those films, so we were always going to see a Bergman, or a Fellini, or something else. We were well exposed to those things.”

Writer, researcher, and artist with eclectic interests. View all posts by Kimberly Lindbergs