Rosemary’s Baby (1968), which is streaming on The Criterion Channel at FilmStruck throughout the month of March (2017), is rightly hailed as one of the best American horror films of the 1960s. It begins and ends with a mother’s lullaby but the unsettling story of Rosemary and Guy Woodhouse is anything but soothing. Mia Farrow and John Cassavetes star as a young married couple who move into an antiquated apartment building in New York with an unpleasant history. After reluctantly befriending some colorful and intrusive elderly neighbors (Ruth Gordon and Sidney Blackmer), the Woodhouse’s lives are gradually transformed into a Faustian nightmare.

Ira Levin (A Kiss Before Dying [1953], The Stepford Wives [1972], The Boys from Brazil [1976], Deathtrap [1978]) wrote the original novel and the film rights were purchased by William Castle, a beloved purveyor of low-budget gimmick-driven thrillers. Castle hoped to shoot the film adaptation of Rosemary’s Baby himself but after making a deal with Paramount, studio executive Robert Evans insisted that a young Polish filmmaker named Roman Polanski (Knife in the Water [1962], Repulsion [1965], The Fearless Vampire Killers [1967], Macbeth [1971]) be brought on board to direct. Castle was resigned to the position of producer but he does get a brief Hitchcock-like cameo in the film. It’s a fun exercise to imagine how Castle (House on Haunted Hill [1959], The Tingler [1959], 13 Ghosts [1960], Strait-Jacket [1964]) would have treated the material but in Polanski’s masterful hands, Levin’s modern retelling of the Faust legend became a thing of bone-chilling beauty mixed with macabre humor and a pointed critique of the decade that spawned it.

Few films capture the confusion, fear and paranoia that was sweeping across the country and threatening to engulf a nation as effectively as Rosemary’s Baby. Levin’s book was published in 1965 and Polanski’s film adaptation was released on June 12 in 1968. A week earlier Bobby Kennedy had been gunned down in a Hollywood hotel and in the years leading up to that shocking event, Americans had witnessed the assassinations of Martin Luther King Jr., Malcolm X and Bobby’s brother, President John F. Kennedy. Political and social unrest was erupting across the country as the U.S. waged a cold war against an ill-defined enemy. Amid rising public distrust and pandemonium, one news story seemed to capture the imagination of traumatized citizens and encapsulate their fears; the brutal rape and murder of Kitty Genovese.

Genovese, who was the subject of the recent documentary The Witness (2015), was reportedly attacked outside her New York apartment in full view of neighbors in 1964 but her screams for help went unanswered. The New York Times sensationalized the story claiming that there were 37 or 38 witnesses to the crime (we now know that number was much, much smaller) who did nothing to help the young woman in distress. The apathy of Genovese’s neighbors made them appear responsible for her death and the crime generated book-length think pieces analyzing the nihilistic implications of the event.

Ira Levin was undoubtedly familiar with Kitty Genovese’s story when he wrote Rosemary’s Baby and his tale, which describes the experiences of a young woman who is physically and psychologically tortured by her spouse and Devil worshipping neighbors, alludes to it in various ways that are echoed in Polanski’s film. The most blatant reference takes place in the laundry room of the apartment building after Rosemary and Guy have settled into their New York lodgings (the historic Dakota hotel). The laundry facilities are located in the dark, damp and unwelcoming basement of the old development and while there, Rosemary encounters a neighbor who goes by the name of Terry Gionoffrio (Angela Dorian a.k.a. Victoria Vetri), which is reminiscent of Kitty Genovese.

Besides sharing similar names with Italian origins, the fictional Terry also resembles Kitty who had short dark hair, large dark eyes and a vivacious personality. During their conversation, Rosemary learns that Terry is a recovering drug addict who was coaxed off the streets and given a second chance at life by Minnie (Ruth Gordon) and Roman (Sidney Blackmer) Castevet. Afterward, Rosemary mentions how nice it is to know that individuals like the Castevet’s exist when she’s heard so much about “apathy and how people are afraid of getting involved.” When Terry dies suddenly after jumping or falling (or being pushed?) out of a window in the apartment she shares with the Castevet’s, Rosemary takes Terry’s place becoming another probable stand-in for Kitty and the final victim of her unsympathetic neighbor’s diabolical plan.

This phantasmagoria of strange sights and sounds begins when Rosemary slips into a state of semi-consciousness after eating a drug-laden chocolate “mouse” dessert provided by her noxious new neighbors. While drifting aimlessly on imaginary seas Rosemary boards John F. Kennedy’s yacht and discusses Catholicism with the dead president before gliding through the Sistine Chapel. Later, the president’s widow appears dressed in a white angelic gown and comforts Rosemary as she babbles about mouse bites while the Pope presides over the bizarre events. All of this is occurring while Rosemary’s nude neighbors are performing a satanic ritual that allows the devil to rape and impregnate her. The juxtaposition of sex, violence, occultism and contemporary social commentary mutates into a chilling condemnation of the decade’s free love and peace ideals. Towards the end of the film the expectant Rosemary comes across an actual 1966 issue of Time magazine in a doctor’s waiting room that asks readers “Is God Dead?” and as destruction, decay and the devil’s offspring descend on New York the only response imaginable seems to be “Yes.”

Mia Farrow is often singled out for her star-making role as the sympathetic and heartbreakingly vulnerable Rosemary Woodhouse but Polanski’s film is packed with marvelous performances from screen veterans. Ruth Gordon won a much-deserved Oscar for playing Minnie Castavet, a conniving, fast-talking pushy little witch who forces herself into the Woodhouse’s home and Sidney Blackmer is perfect as her formidable “hubby.” Other standout characters include Ralph Bellamy as the devious Dr. Sapirstein, Patsy Kelly as the nutty knitting neighbor, Elisha Cook Jr. as the chatty apartment manager and Maurice Evans as Rosemary’s attentive friend Hutch. Nevertheless, my favorite performance in the film just might be John Cassavetes’ interpretation of Rosemary’s desperate and deceitful husband, Guy Woodhouse.

By all accounts, Polanski and Cassavetes were in conflict throughout the making of Rosemary’s Baby. Both men were directors and actors with very different styles, which undoubtedly led to tension on the set. Polanski preferred to govern all aspects of his film including the line delivery and gestures of his cast, while Cassavetes (Shadows [1959], Faces [1968], A Woman Under the Influence [1974], The Killing of a Chinese Bookie [1976]) pioneered improvisational filmmaking and encouraged a collaborative environment. When these two men clashed it created a fission that reverberated throughout the film. Cassavetes’ was always wound-up tight and his performances often demonstrated his edgy personality but Polanski’s insistence on reining him in and trying to contain all that prickly energy helped define Guy Woodhouse. Guy is a man who torments his young bride so he rightfully generates disdain from viewers but thanks to Cassavetes taut portrayal, his character is also a fascinating portrait of a man and artist in crisis.

We first meet Guy while he is apartment hunting with Rosemary. When the building manager asks if Guy’s a doctor he pretends that he is in an attempt to bolster his financial standing but Rosemary reveals that he’s actually an actor. Clearly perturbed, Guy proceeds to list some impressive fictitious acting credits but he’s shot down by Rosemary again after she points out that her husband is mainly a television actor who regularly appears in commercials. Afterward, the building manager politely suggests that commercials are “where the money is at” and the increasingly frustrated Guy sarcastically responds, “And the artistic thrills too!”

We immediately understand that Guy’s dreams and desires have very little in common with the life his wife longs for. This becomes clear as the movie progresses and the carefree Rosemary obsesses over starting a family and redecorating their new apartment while spending untold amounts of money on paint, wallpaper and furniture. In the meantime, Guy grimaces in the background complaining about the scarcity of acting jobs. He doesn’t want the domesticity that Rosemary craves and he can’t afford another mouth to feed. How to pay the rent, how to satiate his withering ego and how to fulfill his creative urges are the only things on Guy’s mind and Cassavetes does a masterful job of letting us know his character’s concerns through body language. His eyes shift constantly and he is always on his feet. He wants to keep moving forward and he wants out of that stifling apartment. Is it any wonder that this deeply unsatisfied man makes a bargain with the devil?

To get a real appreciation for what Cassavetes does with his unlikable character, watch how he avoids Rosemary once he has sacrificed her and her child to gain fame and fortune. His shame is palpable even as he is lashing out. He cannot bring himself to touch the monster growing inside Rosemary’s belly and after she gives birth, he can barely bring himself to make eye contact with his wife. His self-degradation is all-consuming. He knows he is the villain in this story and like Faust, he will eventually have hell to pay for his transgressions. 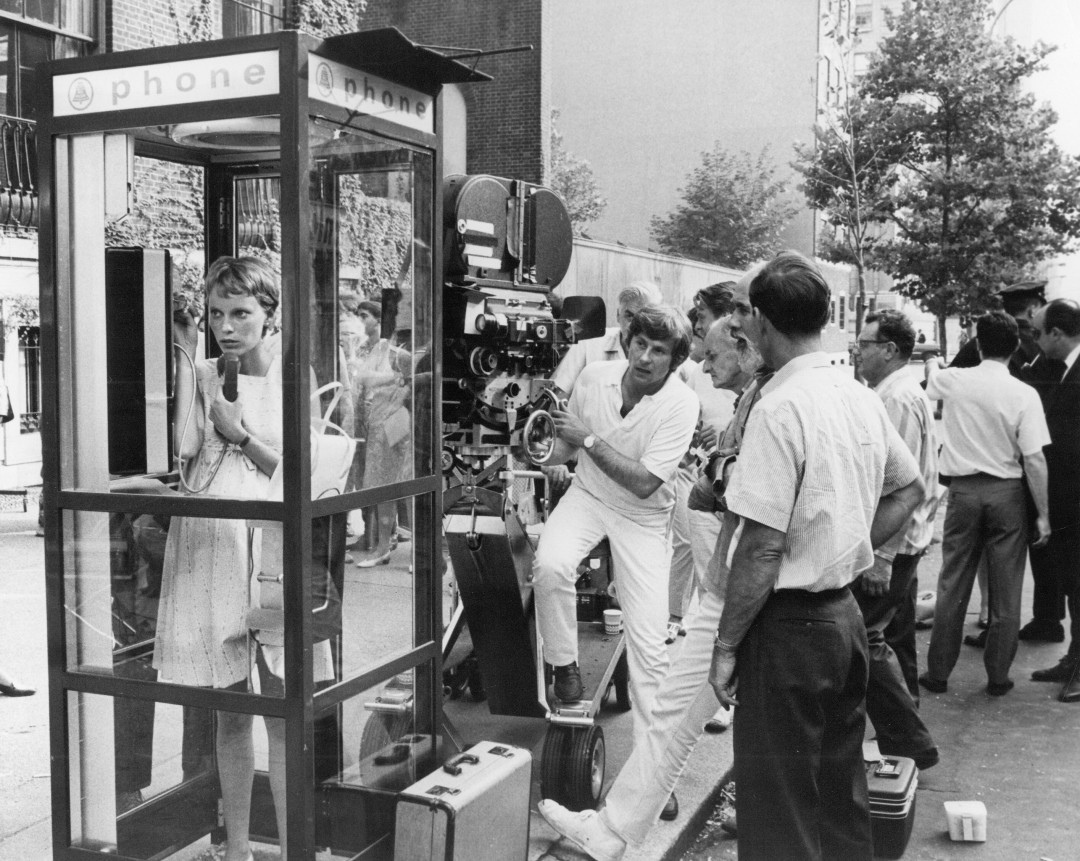 Rosemary’s Baby is one of three films in Polanski’s often-cited “Apartment Trilogy” that also includes Repulsion (1965) and The Tenant (1976). The director, who spent his early years surviving the Kraków Ghetto, knew firsthand what it was like to live in the cramped confines of an old building where inhabitants are stacked on top of one another living shoulder to shoulder. In Polanski’s eerie cinematic studies of apartment living, he accentuates the deteriorating architecture that often mirrors the fractured minds and frazzled nerves of the residents. Thin rotting walls only provide the semblance of privacy while discordant domestic sounds such as snippets of overheard conversations, doorbells and telephones repeatedly trigger terror.

By employing wide lenses and shooting the ensuing drama from intimate angles, the director draws us in and demands that we share the character’s experience. We creep around corners, gaze out windows, peer into peepholes, analyze reflections and scrutinize light as it dances between door cracks. By the end of the film, we no longer feel like passive observers. We have become another confused and condemned occupant of Polanski’s urban purgatory.