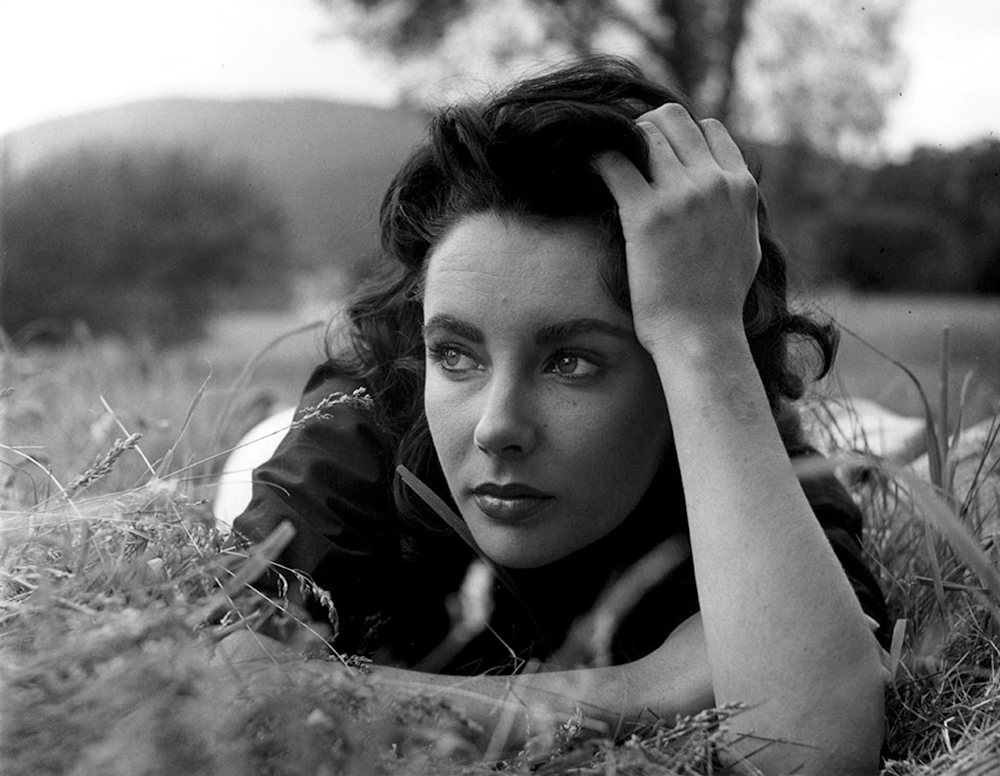 Elizabeth Taylor has always been one of my favorite actresses. She was an incredible natural beauty. Arguably the most beautiful actress Hollywood ever produced but she was also a brilliant performer when she wanted to be. She dominated almost every film she ever appeared in even when that film wasn’t particularly worthy of her larger than life presence. Taylor was a complex woman with a rich inner life who enjoyed living and one look into her deep violet eyes told you this. Inside of Taylor, there seemed to be a volcanic mountain of emotion just waiting to explode. Her appetite for life was voracious but her heart was huge, open and warm. These are rare and wonderful qualities that you seldom find in any Hollywood stars.

It’s hard to single out a handful of Taylor films that are favorites when I think about her body of work. I liked her in everything she did. I just enjoyed watching her no matter how lousy the film was or how out of step her performance might have been. She was captivating and enchanting in ways that are hard to explain. Even as a child actor in films like Jane Eyre (1943) and National Velvet (1944) you knew you were watching something special. Taylor made magic happen on screen. She does have her critics though. Men in particular often seem threatened by her powerful and unapologetic performances that occasionally seemed to mirror her real life. Her bold confidence, earthy glamour, curvy figure and wild black locks were at odds with Hollywood’s feminine ideal, which is often represented by gentle, poised, soft-spoken angelic figures like Grace Kelly and Audrey Hepburn.

Some of Elizabeth Taylor’s most complex and expressive performances can be found in George Stevens’ A Place in the Sun (1951) where she holds Montgomery Clift’s troubled heart in her hands and Giant (1956) where her graceful beauty seems to soften the harsh Texas landscape that she’s dropped into after her character marries Rock Hudson. And it’s impossible to think of another actress who could disarm James Dean’s awkward and love-struck Jett Rink as effortlessly as Taylor’s character did. In Raintree County (1957) she has some wonderful moments playing a mad Southern bell that has captured Montgomery Clift’s heart once again and she was incredibly sexy, seductive and compelling opposite Paul Newman in Cat on a Hot Tin Roof (1958) and Laurence Harvey in BUtterfield 8 (1960).

After her celebrated role in Joseph L. Mankiwewick’s Cleopatra (1960) where she won critical acclaim, as well as her co-star Richard Burton, Taylor’s popularity exploded and her celebrity began to overshadow her work. Any other actress would have used her superstar status to take on glamorous roles in conventional films but Taylor wasn’t interested in playing it safe. As the 1950s made way for the 1960s she appeared in dark dramas like Suddenly, Last Summer (1959) as a distressed young woman who is tormented by her memories opposite a frightful Katharine Hepburn and a sympathetic Montgomery Clift. And in Mike Nichols’ Who’s Afraid of Virginia Woolf (1966) Taylor teamed up with her talented husband to portray a woman much older than herself who’s distraught by the direction her life has taken and fends off disappointment with too much booze and her cutting wit.

Following her Oscar-winning role in Who’s Afraid of Virginia Woolf?, Taylor joined Burton again in Franco Zeffirelli’s superb Shakespeare adaptation of The Taming of the Shrew (1967). That same year she worked with John Huston in his brilliant and undervalued adaptation of Carson McCullers’ Reflections in a Golden Eye(1967) playing Marlon Brando’s disillusioned wife stalked by a young and admiring Robert Forster. Afterward, she teamed up with the blacklisted director Joseph Losey and appeared in two of his most controversial films, Boom! (1968) and Secret Ceremony (1968). I happen to think Losey is one of our greatest directors so it’s hard for me to be critical of his work but it’s a shame that these films are so often overlooked when they both contain some great moments and daring performances.

As the decade came to a close Elizabeth Taylor appeared on countless magazine covers and every move she made was tracked by gossip columnists but film critics were becoming particularly hostile towards her. Although she was wonderfully creepy opposite Laurence Harvey in the psychological thriller Night Watch (1973), incredibly sympathetic as Henry Fonda’s neglected wife in Ash Wednesday (1973) and amazingly brave and brass in The Driver’s Seat (1974), the 1970s are generally considered a forgettable decade in Taylor’s long career before she was regulated to TV work. I don’t happen to agree with that assumption, which is too often repeated by critics and very rarely investigated. Taylor brought all of her life experience, problems and passions to her later performances. This means that some of the films were rather messy but rarely boring.

As good as an actress as Taylor was it’s impossible to separate her private life from her very public one. Her many marriages are legendary and she was one of the first celebrities to openly discuss her addictions to alcohol and prescription pills publicly. Her generous nature led her to befriend many of her costars and Taylor naturally gravitated towards outsiders, malcontents and dark horses like Montgomery Clift, Laurence Harvey, Rock Hudson and Michael Jackson as well as her two-time husband Richard Burton. That’s one of the things that I loved about her. She was Hollywood royalty but she never really fit in.

Taylor had no problem telling producer Louis B. Mayer to “go to hell” after he swore at her mother and she famously called director George Stevens “a callous bastard” when he ordered the actress to return to the set of Giant after learning that her co-star and friend (James Dean) had died. Taylor always appeared to be drifting above it all and never seemed to have any regrets even though she once told Larry King that she was “sorry if I ever hurt anyone.” She was determined to carve out her own path in a world that wasn’t always particularly kind to her. Whether it was championing a cause like AIDS research long before our own government bothered to care or just hawking her own jewelry and perfume lines that profited the charities she supported, the actress gave of herself over and over again.

Elizabeth Taylor will be missed by many and I’m sure plenty of other critics and fans besides myself will be celebrating her life this week as well as trying to diminish her legacy but that’s impossible. Taylor looms as large as Cleopatra herself on our cultural landscape. But she wasn’t just a pop culture icon. The Oscar-winning actress helped invent the term. Warhol turned her image into art. Mattel turned her image into a Barbie doll. The Vatican condemned her “erotic vagrancy” and the Queen of England honored the actress by appointing her a Dame Commander of the Order of the British Empire. Taylor’s timeless beauty will haunt us forever. She’s part of all of our lives whether we want her to be or not and I’m thankful for the incredible body of work that she left behind for us to enjoy.

On Sunday, April 10th, TCM will begin airing a 24-hour tribute to the actress. Some of Elizabeth Taylor’s best films will be shown including many of the titles I’ve mentioned above such as Giant, Raintree County, Cat on a Hot Tin Roof, Butterfield 8 and Who’s Afraid of Virginia Woolf? And if you’re one of the lucky people who will be attending TCM’s Classic Film Festival this year you’ll be able to see a special 60th anniversary screening of A Place in the Sun.

In memoriam, I’ve compiled a list of memorable quotes about Elizabeth Taylor from people who knew her.

“She was, I decided, the most astonishingly self-contained, pulchritudinous, remote, removed, inaccessible woman I had ever seen. She spoke to no one. She looked at no one. She steadily kept on reading her book. Was she merely sullen? I wondered. I thought not. There was no trace of sulkiness in the divine face. She was a Mona Lisa type, I thought. In my business, everyone is a type. She is older than the deck chair on which she sits, I thought headily, and she is famine, fire, destruction, and plague, she is the Dark Lady of the Sonnets, the on lie true begetter. She is a secret wrapped in an enigma inside a mystery, I thought with a mental man-to-man nod to Churchill. Her breasts were apocalyptic, they would topple empires down before they withered.” – Richard Burton

“Elizabeth is very extreme in her likes and dislikes. If she likes, she loves. If she doesn’t like, she loathes. And she has a temper, an incredible temper, which she loses at any injustice.” – Rock Hudson

“I can say only good things about Elizabeth Taylor. I discovered that more than a great beauty or personality, she was a supremely fine actress.” – John Huston

“The shock of Elizabeth was not only her beauty. It was her generosity. Her giant laugh. Her vitality, whether tackling a complex scene on film or where we would all have dinner until dawn. She is singular and indelible on film and in our hearts.” – Mike Nichols

“She was an icon then and she is an icon now. She never stopped being one.” – Robert Forster

“It’s the end of an era. It wasn’t just her beauty or her stardom. It was her humanitarianism. She put a face on HIV/AIDS. She was funny. She was generous. She made her life count.” – Barbra Streisand

“We have just lost a Hollywood giant. More importantly, we have lost an incredible human being.” – Elton John