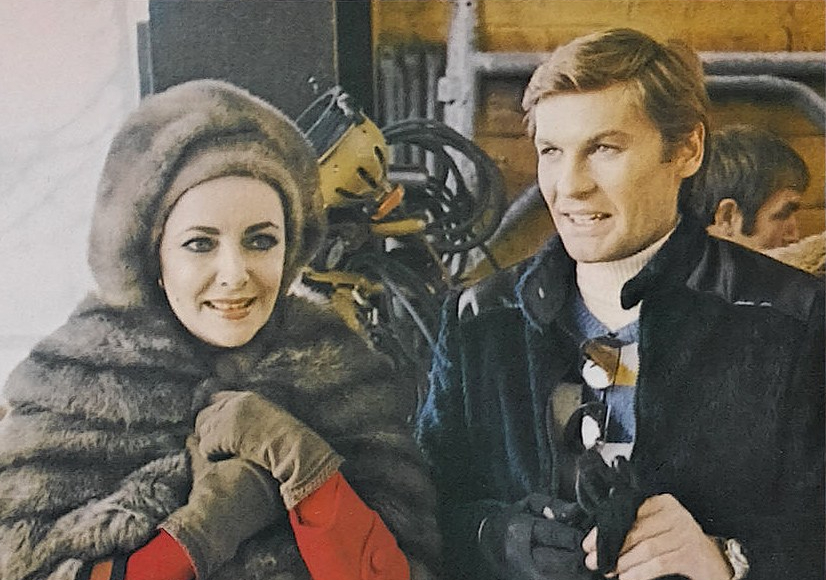 Yesterday was Elizabeth Taylor’s 77th birthday. Last year I wasn’t able to properly complete my tribute to Taylor and I never finished writing about a few of her films that I want to cover here sooner or later, but today I thought I’d offer up a few brief thoughts about her 1973 film, Ash Wednesday.

The paper-thin plot of Ash Wednesday was summed up perfectly by Roger Ebert in his review of the film (published in his book I Hated This Movie) so I’ll just quote him here:

“Ash Wednesday is a soapy melodrama that isn’t much good as a movie but may be interesting to some audiences all the same. It’s about how a 50ish wife (Elizabeth Taylor), her marriage threatened by a younger woman, has a face-lift in order to keep her husband (Henry Fonda). It doesn’t work, but she gets a nice winter in a ski resort out of it and an affair with Helmut Berger.”

In all honesty that’s all, there is to Ash Wednesday. Trying to read some deeper subtext into Jean-Claude Tramont’s script is pointless so I won’t bother. But when you consider the film’s 1973 release date, the movie becomes notable for the way it dared to tackle aging and beauty myths. In a memorable opening sequence featuring actual footage from real operations; viewers are subjected to an appropriately ugly and unflinching look at cosmetic surgery as an elderly Elizabeth Taylor decides to reluctantly go under the knife. The makeup used to age Taylor (who was only 41 years old) is pretty convincing, but she’s soon magically transformed into the flawless middle-aged beauty that she actually was at the time.

As the film slowly unfolds the audience is supposed to be surprised by the May-September romance that blossoms between 41-year-old Elizabeth Taylor and 29-year-old Helmut Berger, but that’s impossible. Taylor still looked stunning at 41, which only manages to muddle the plot. And when a ragged looking Henry Fonda finally shows up as the cold distracted husband who is having an affair behind Taylor’s back you’re left wondering, why? There is a great scene where Taylor confronts Fonda’s character telling him that she only had plastic surgery in an effort to get him back but Fonda isn’t moved. Taylor’s character is forced to realize that plastic surgery can’t save a marriage that is emotionally dead.

The only real reason to sit through Ash Wednesday is to watch lovely Liz and handsome Helmut Berger exchange passionate glances and loaded words until they finally fall into bed together. Taylor looks amazing in the film and waltzes through it wearing some fabulous Edith Head costumes and impressive Valentino fashions. Her performance is also convincing and low-key even if the material is subpar. She could have easily hammed it up, but Taylor obviously has some emotional connection to the character she’s playing and her sincerity is believable. On the other hand, the talented Helmut Berger is wasted here and he seems more than a little distracted in the film.

Rumor has it that Richard Burton thought Ash Wednesday was incredibly vulgar and he was bothered by the love scenes Berger shared with Taylor. Burton was sure that Berger and Taylor were having an affair off-screen as well, even though Berger was open about his homosexuality. According to writer Dominick Dunne who produced Ash Wednesday, the behind-the-scenes drama happening during the making of the film was more interesting than anything going on in front of the cameras. Taylor was chronically late to the set prompting Paramount Studio head Robert Evans to fly off the handle and the fights that occurred between Taylor and Burton were explosive enough to frighten the rest of the cast and crew.

Director Larry Peerce previously had some success directing episodes of Batman (1966) and The Wild Wild West (1967), as well as popular films such as Goodbye, Columbus (1969), but he brings none of the style or humor from his earlier efforts to Ash Wednesday. The film takes much too long to get going and there aren’t enough bedroom scenes in it. But what does occur is rather steamy so if you happen to love watching Elizabeth Taylor and Helmut Berger on screen as much as I do, you might find Ash Wednesday worth a look.

On the other hand, Ash Wednesday is really just a blueprint for the type of dull and lurid melodrama that you might find playing on the Lifetime Movie Channel at 1am. And if I didn’t know any better I’d swear the script was adapted from some Harlequin romance novel. If that sort of thing holds no appeal you should probably avoid this.

Ash Wednesday is only available on video and I can’t really make a case for its DVD release. Many of Elizabeth Taylor’s adoring fans would probably like to see the film become more easily available, but for now they’re going to have to pick up a used copy of the Paramount VHS at Amazon

if they want to see it.

You can find more images from the film in my Ash Wednesday Flickr Gallery.